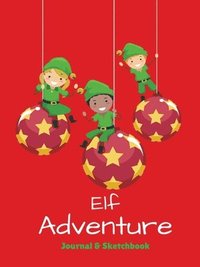 This Elf adventure Journal and Sketchbook can be used along with Elf on the Shelf® to create and save great memories each Christmas of your children's Elf adventures.

Attach pictures with each adventure next to the tale of what their Elf did that day. Or they can draw their own picture and attach stickers. They will have so much fun writing down where the Elf was when they woke up, what was their Elf doing on the Shelf while they were at school and more. With daily questions, it becomes a Christmas Elf Diary for your Child.

The Elf Adventure Journal and Sketchbook promote Writing, Reading and Creative drawing by your child when they write to create the Elf?s Diary and make a coloring book of what their Elf did. They will love looking back at it years from now and reliving the memories they and your family made with their elf each holiday season.

Teachers can use it in their classroom. The students can join in to write the story everyday of what the Elf has been up too.

Create Fun-filled tradition with an Elf adventure yearly book for a lifetime of memories Perfect gift for everyone on your Christmas list, A tradition the whole family can enjoy.

-Last minute gifts for any family with young children

-25 days to match the Advent Calendar

-Blank pages in the back for more drawing

Jenn Foster is a fifteen-times bestselling author, one of today's national leading digital marketing specialists, an award-winning web designer, and recipient of the esteemed "Quilly Award". She is the Founder/Owner of Elite Online Publishing as well as Founder/CEO of Biz Social Boom. Jenn is dedicated to helping business owners boost their revenue, and catapult their visibility to become business influencers.

Jenn is a graduate of Utah State University. She owned and operated a chain of successful retail stores. Jenn has been named one of America's Premier Experts and is highlighted in the Dan Kennedy Book, Stand Apart. She was recently named one of "Utah's Thought Leaders" in the book Innovate Utah by Global Village. Jenn is the co-host of Elite Expert Insider Podcast on iTunes and Libsyn Radio. Jenn is a single mother, loves spending time with her three children and experiencing the great outdoors. Melanie Churella Johnson is a fourteen-times bestselling author, she has owned and operated two TV stations in Houston and Dallas. She has been in front of and behind the camera, after she won the title of Miss Michigan and was first runner up to Miss America. She built and marketed the Houston Mansion and the Walloon Lake House. Melanie is currently the owner and founder of Elite Online Publishing that has made over 100 authors #1 bestsellers and Charity Auction Consignments which has raised almost $600,000 for non profits. Melanie is a co-host of the podcast Elite Expert Insider and was a TEDx speaker in 2016 in Sugarland Tx. Melanie graduated from Michigan State University with a degree in communications and was the first girl to receive a varsity letter in a boys sport in the state of Michigan. . Melanie is the co-host of Elite Expert Insider Podcast on iTunes and Stitcher Radio. She is a single Mom raising her two sons, one of which was featured in the NY Times.