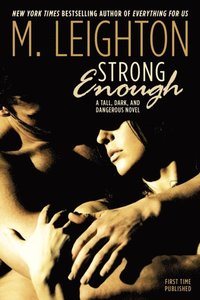 av M Leighton
E-bok (EPUB - DRM), Engelska, 2015-08-04
39
Ladda ned
Spara som favorit
Laddas ned direkt
Läs i vår app för iPhone, iPad och Android
From the author of the New York Times bestselling Bad Boys novels comes the first in a dark, sexy contemporary trilogy. Is she strong enough to trust the most dangerous man she?s ever met? And is he strong enough to let her? How would I describe myself? Well, I?m Muse Harper. I?m a twenty-something painter who loves red wine, quirky movies, and men with a fatal flaw. But that was before I met Jasper King. He became my fatal flaw. Eight months ago, I had a choice to make?abandon everything I?ve ever known to protect my family, or stay and risk someone getting hurt. I chose the former. My plan was working just fine until I found out my father had gone missing.That?s when I met Jasper. A bounty hunter with the eyes of a tiger and the nose of a bloodhound, he was supposed to help me find my father. What I didn?t know was that meeting him was no accident. Hunting people isn?t all that Jasper does. And helping me was only part of his plan. I just wish I?d found out sooner, before my heart got involved. But even then, I don?t know if I?d have done things differently.Now, I have another choice to make?trust the man that I?m falling in love with and hope that he?ll do the right thing, or run as far away from him as I can get.
Visa hela texten