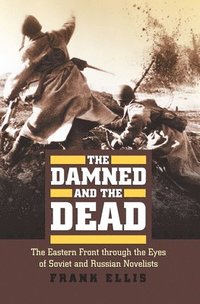 The Damned and the Dead

The Eastern Front through the Eyes of Soviet and Russian Novelists

av Frank Ellis
Inbunden Engelska, 2011-06-15
569
Bevaka
Spara som favorit
Tillfälligt slut – klicka "Bevaka" för att få ett mejl så fort boken går att köpa igen.
The confrontation between the Wehrmacht and the Red Army on the Eastern Front of World War II was defined by incalculable suffering, destruction, casualties, and heroism. While many historians have chronicled the epic nature of that arena of war, it has largely been left to Russian novelists to fully express the intense human dimensions of that conflict. Frank Ellis's groundbreaking study provides the first comprehensive survey of that impressive body of literature. Canvassing a wide spectrum of works by Soviet and post-Soviet writers, many of whom were war veterans themselves, Ellis uncovers themes both common to war literature in general and distinctive to the Soviet experience. He recalls the earliest works in this genre by Emmanuil Kazakevich, Grigorii Baklanov, and IUrii Bondarev; presents a long overdue assessment of Vasil' Bykov's work, which focuses on the partisan war in Bykov's native Belorussia; and brings into sharp focus the powerful Stalingrad novels of Vasilii Grossman, Konstantin Simonov, Viktor Nekrasov, and Bondarev. He also provides keen insights into the heroic portraits of Stalin in the fiction of Ivan Stadniuk and Vladimir Bogomolov and examines three important war novels published during the 1990s: Viktor Astaf'ev's The Damned and the Dead, Georgii Vladimov's The General and His Army, and Vladimir But's Heads-Tails. One of the many threads running throughout Ellis's study is the dilemma of the Red Army soldier condemned to serve a regime that was utterly paranoid regarding the allegiances of its own armies, so much so that Soviet soldiers often felt as threatened by the Soviet government as they did by the German armies. Many of these novels reinforce the now well-known fact that Stalin devoted considerable resources to ferreting out soldiers whose actions (or inactions) suggested disloyalty to his repressive regime. A few of them-such as Grossman's Life and Fate-became battlegrounds in their own right, pitting Soviet writers against Soviet censors in a struggle over the public memory of the war. Russia's memories of World War II are forever tied to the suffering of its people. Ellis's rich and revealing work shows us why.
Visa hela texten

An excellent, innovative, and hugely ambitious enterprise that will likely remain the definitive statement on the subject for years to come. . . . Of interest to readers of war literature in any language.--David Gillespie, author of The Twentieth-Century Russian Novel: An IntroductionAn important contribution to our understanding of the Russian experience in the Second World War. I wish I had had the opportunity to read it while I was writing Armageddon: The Battle for Germany, 1944-1945.--Sir Max Hastings, author of Winston's War: Churchill, 1940-1945 A 'must-read' that lifts the veil from the human dimension of combat in the most brutal theater of World War II.--David M. Glantz, author of The Stalingrad Trilogy The Damned and the Dead provides multifaceted and uniquely Russian perspectives of why Soviet citizens resisted the German invasion and will be of interest to historians of World War II's eastern front.--Army HistoryA rich resource and a timely contribution to an underappreciated topic. . . . Ellis's book paves the way for future scholarship on the Soviet experience of the Second World War.--Russian Review The author's vast knowledge of British and German fiction about war, and his appropriate invocation of American and other war films, add to the impressive inventory of war novels and stories about which he writes. . . . This book will be interesting to students of war and war literature generally, to specialists in Russian history and literature, and to the general public.--Slavic Review Ellis has provided an excellent overview of Soviet and Russian Eastern Front literature. With a chapter analyzing Red Army motivation based on NKVD reports from Stalingrad, which challenges the purely patriotic explanation for the victory, and appendices on key military orders and the principal 'Works and Characters' with which Ellis deals, this book will be essential reading for any student of Soviet and modern Russian literature and history.--New Zealand Slavonic Journal