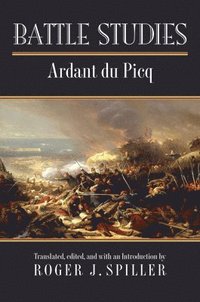 av Charles Ardant Du Picq, Roger J Spiller
Häftad Engelska, 2017-02-24
229
Köp
Spara som favorit
Finns även som
Visa alla 8 format & utgåvor
A classic of military thought that merits a place alongside the works of Clausewitz and Sun Tzu, Battle Studies was first published in Paris ten years after the death of its author, French army officer Charles Ardant du Picq (1821-1870). Updated to provide a more complete and accurate biographical and historical framework for understanding its meaning and import, this edition-deftly translated, introduced, and annotated by noted military historian Roger Spiller-offers a new generation of readers the benefit of Ardant du Picq's unique insight into the nature of warfare. Nothing, Ardant du Picq asserts, can be prescribed wisely in an army "without an exact understanding of its ultimate instrument, man, and his morale at the defining instant of combat." Accordingly, Battle Studies, the first systematic exploration of human behavior in the extremities of combat, focuses squarely on the tactical realm its author knew so well. Eschewing grand military theories and strategies, Ardant du Picq draws on his real-world experience, especially during the Crimean War and the Siege of Sebastopol where he was captured, to examine what motivates a soldier to fight, what creates cohesion or disorder, what gives a commander tactical control, and what makes reason give way to instinct: in short, "the essence of the science of combat."
Visa hela texten

Spiller has given us a clear, fine translation of this minor military classic and he provides, in an excellent introductory chapter, an extensive analysis of du Picq's life and military thought--one that helps us better understand this controversial and oft-caricatured soldier and theorist.--Journal of Military HistoryGeneral readers will value this new edition du Picq's work for its author's insights into human behavior in combat in a distant age. Among military professionals, the book will stimulate salutary reflection and discussion. Its editor/translator deserves our gratitude for his last gift to military history--a definitive English version of Battle Studies.--Michigan War Studies Review The perfect pairing of one of today's preeminent military historians with one of the best volumes ever written on the human dimension of war. . . . Spiller has made a book crafted over 140 years ago far more applicable and accessible to a new generation of readers. . . . Battle Studies is as influential and impactful today as when first written. Spiller has taken this powerful volume and provided incredible context and perspective through his diligence and expertise.--Military Review Few military thinkers have been able to grasp the reality of battle like Colonel Charles Ardant du Picq. What mattered to him were the combatants--their moral strength, their sufferings, their fears, and their courage. His Battle Studies, which were widely referenced during the First World War and one hundred years later inspired John Keegan's pioneering Face of Battle, have long remained inaccessible to Anglophone readers. Surprisingly modern, this path-breaking book will captivate all readers interested in the human experience of combat.--Bruno Cabanes, author of Victory in Mourning: French Soldiers and the Transition to Civilian Life, 1918-1920Ardant du Picq's Battle Studies stands as the first study of human behavior at the sharp end of a modern industrial battlefield. His focus was no less unique: the fear that ultimately shapes performance in combat. Spiller's introduction, brilliantly contextualizing du Picq's pioneering insight, combines with his polished translation and annotations to make this the definitive English version of a seminal analysis of men in war.--Dennis Showalter, author of The Wars of German Unification and founding editor of War in History Colonel Ardant du Picq served in a French army still regarded as the world's best. Decorated for valor in the Crimean War, killed in the Franco-Prussian War, he never lived to see its eclipse. His posthumous Battle Studies is a classic for two reasons: it sheds important light on the brutal dilemmas of the nineteenth-century European army, and it anticipates timeless questions of leadership, discipline, morale, and motivation that animate armies today as powerfully as they did in 1870. Fear, Ardant du Picq asserted, is every unit's chief enemy, and the duty of officers (and good troops) is to slow its progress through the ranks while finding creative ways to win. Spiller has rescued this unique inquiry from obscurity and caricature. Ardant du Picq never said the things so often attributed to him--that troops must attack under all circumstances, that morale trumps firepower--rather he groped for the right mix of tactics and attitudes to move all arms forward in the face of withering fire.--Geoffrey Wawro, author of The Franco-Prussian War: The German Conquest of France in 1870-1871 Ardant du Picq's most important insight was that military discipline operates horizontally as well as vertically. That is to say, a soldier's comrades matter at least as much as their commanders in determining their behavior on the battlefield. Thanks to Spiller's admirable translation and a fine analytical introduction to the life, career, and influence of Ardant du Picq, Battle Studies can now enjoy the position it assuredly deserves in the English-speaking world. Scholars in military studies, military history, wa

Roger J. Spiller is the George C. Marshall Distinguished Professor Emeritus of Military History and former director of the Combat Studies Institute at the US Army Command and General Staff College. He is the author of An Instinct for War: Scenes from the Battlefields of History. He has also served as an advisor to Ken Burns on documentary television series on World War II and the Vietnam War.