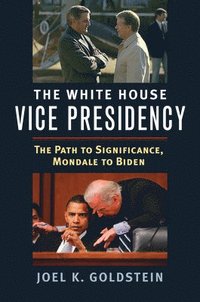 The Path to Significance, Mondale to Biden

av Joel K Goldstein
Häftad Engelska, 2017-03-30
329
Köp
Spara som favorit
Fåtal ex i lager. Skickas inom 1-2 vardagar.
Fri frakt inom Sverige för privatpersoner.
Finns även som
Visa alla 2 format & utgåvor
"I am nothing, but I may be everything"", John Adams, the first vice president, wrote of his office. And for most of American history, the "nothing" part of Adams's formulation accurately captured the importance of the vice presidency, at least as long as the president had a heartbeat. But a job that once was "not worth a bucket of warm spit," according to John Nance Garner, became, in the hands of the most recent vice presidents, critical to the governing of the country on an ongoing basis. It is this dramatic development of the nation's second office that Joel K. Goldstein traces and explains in The White House Vice Presidency. The rise of the vice presidency took a sharp upward trajectory with the vice presidency of Walter Mondale. In Goldstein's work we see how Mondale and Jimmy Carter designed and implemented a new model of the office that allowed the vice president to become a close presidential adviser and representative on missions that mattered. Goldstein takes us through the vice presidents from Mondale to Joe Biden, presenting the arrangements each had with his respective president, showing elements of continuity but also variations in the office, and describing the challenges each faced and the work each did. The book also examines the vice-presidential selection process and campaigns since 1976, and shows how those activities affect and/or are affected by the newly developed White House vice presidency. The book presents a comprehensive account of the vice presidency as the office has developed from Mondale to Biden. But The White House Vice Presidency is more than that; it also shows how a constitutional office can evolve through the repetition of accumulated precedents and demonstrates the critical role of political leadership in institutional development. In doing so, the book offers lessons that go far beyond the nation's second office, important as it now has become.
Visa hela texten

"Joel K. Goldstein's The White House Vice Presidency is the best book ever written about that increasingly important office. It is comprehensive, literate, and polished. Surely no one knows--or has ever known--more about the vice presidency and the vice presidents than Goldstein."--Michael Nelson, author of Resilient America: Electing Nixon in 1968, Channeling Dissent, and Dividing Government"Goldstein's study comprehensively traces the development of the Vice Presidency, charting its evolution into an important office. The White House Vice Presidency will become the go-to study on the office for years to come."--Jeffrey E. Cohen, author of Presidential Leadership in Public Opinion: Causes and Consequences "In this superb analysis, Joel K. Goldstein, the Dean of Vice Presidency scholars, explains how the last six Vice Presidents have transformed the office from a constitutional afterthought with a marginalized role into a powerful partnership with their presidents. You cannot understand the contemporary presidency without understanding the new role of the vice president, and Goldstein's book presents an engaging and authoritative analysis."--James P. Pfiffner, George Mason University "In The White House Vice Presidency, Joel K. Goldstein writes brilliantly of the evolution of the vice presidency from an office of obscurity and derision to one of enormous influence. This book will be essential reading for future presidents and vice presidents as well as those who care about how our government really works; it will be seen by scholars as the definitive work on 'The Modern Vice Presidency.' for years to come."--Richard Moe, Chief of Staff to Vice President Walter Mondale and member of President Jimmy Carter's senior staff, 1977-1981 "The American Vice Presidency is long overdue for a robust reevaluation, and Joel Goldstein--the premiere chronicler of that special office--has done a brilliant job in this perceptive, wide ranging book. Highly recommended for undergraduate survey courses and graduate study as well."--Larry J. Sabato, Director, University of Virginia Center for Politics "The Vice Presidency has long been derided--by comics and politicians alike--as a post leading to oblivion, or, as Vice President John Nance Garner said, equivalent to a 'bucket of warm [spit].' But the role, importance, and power of the office over the past forty years has changed dramatically. In The White House Vice Presidency, Joel Goldstein, the nation's premier scholar of the office, gives a vivid picture of the changes, and in the process provides important insights into presidential decision-making for every occupant of the office since Jimmy Carter. His book will be the definitive guide to the office of vice president and its modern history for a long time to come." --Norman Ornstein, American Enterprise Institute Scholar and author of The Permanent Campaign and Its Future "Based on a close reading of available archival materials; memoirs; newspapers; the secondary source literature in history, political science, and the law; presidential oral history projects; and published primary sources, The White House Vice Presidency is a well-researched, thoughtful, and nuanced treatment of a crucial turning point in the history of American governance."--Political Science Quarterly"Graceful, impeccably researched, and accessible."--The Historian "In general, Goldstein's analysis is remarkably insightful, exhaustively researched, and substantially persuasive. . . . In fact, it is not going too far to say that if you have one book about the vice presidency on your bookshelf, this should be it."--Perspectives on Politics "The book is exceptionally well thought out, researched, and written. It is a true tour de force analysis of a once largely neglected institution, a fine addition to the literature on the presidency and absolutely essential to the study of

Joel K. Goldstein is the Vincent C. Immel Professor of Law, Saint Louis University School of Law. He is the author of numerous works on the vice presidency, presidential succession, and constitutional law.