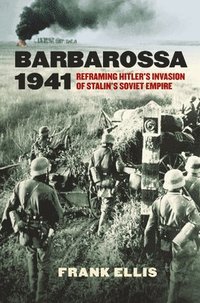 av Frank Ellis
Häftad Engelska, 2018-03-30
339
Köp
Spara som favorit
Skickas inom 10-15 vardagar.
Gratis frakt inom Sverige över 159 kr för privatpersoner.
Finns även som
Visa alla 1 format & utgåvor
Operation Barbarossa, Hitler's plan for invading the Soviet Union, has by now become a familiar tale of overreach, with the Germans blinded to their coming defeat by their initial victory, and the Soviet Union pushing back from the brink of destruction with courageous exploits both reckless and relentless. And while much of this version of the story is true, Frank Ellis tells us in Barbarossa 1941, it also obscures several important historical truths that alter our understanding of the campaign. In this new and intensive investigation of Operation Barbarossa, Ellis draws on a wealth of documents declassified over the past twenty years to challenge the conventional treatment of a critical chapter in the history of World War II. Ellis's close reading of an exceptionally wide range of German and Russian sources leads to a reevaluation of Soviet intelligence assessments of Hitler's intentions; Stalin's complicity in his nation's slippage into existential slaughter; and the influence of the Stalinist regime's reputation for brutality-and a fear of Stalin's expansionist inclinations-on the launching and execution of Operation Barbarossa. Ellis revisits two major controversies relating to Barbarossa-the Soviet pre-emptive strike thesis put forward in Viktor Suvorov's book Icebreaker; and the view of the infamous Commissar Order, dictating the execution of a large group of Soviet POWs, as a unique piece of Nazi malevolence. Ellis also analyzes the treatment of Barbarossa in the work of three Soviet-Russian writers-Vasilii Grossman, Alexander Bek, and Konstantin Simonov-and in the first-ever translation of the diary kept by a German soldier in 20th Panzer Division, brings the campaign back to the daily realities of dangers and frustrations encountered by German troops.
Visa hela texten

Ellis's Barbarossa 1941 addresses and answers many vital questions associated with Operation Barbarossa. Skillfully researched and well written, it is a 'must buy' for those interested in the Soviet-German War specifically, and World War II and military history in general."" - David Glantz, author of Endgame at Stalingrad ""As he did in Stalingrad Cauldron, Ellis uncovers a mass of fresh new material here: recently declassified Russian documentation; literary works; and best of all, the diary of a Gefreiter from the 20th Panzer Division, an invaluable account of the first eight months of the German invasion."" - Robert M. Citino, author of The Wehrmacht Retreats: Fighting a Lost War, 1943

Frank Ellis is the author of many books including The Damned and the Dead: The Eastern Front through the Eyes of Soviet and Russian Novelists and The Stalingrad Cauldron: Inside the Encirclement and Destruction of the 6th Army, which are also published by Kansas.