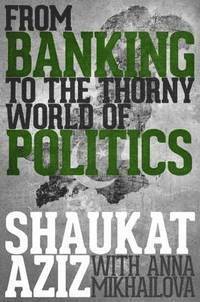 From Banking to the Thorny World of Politics

av Shaukat Aziz, Anna Mikhailova
Inbunden Engelska, 2016-05-26
229
Köp
Spara som favorit
Skickas inom 7-10 vardagar.
Fri frakt inom Sverige för privatpersoner.
An insider's account from the heart of the War on Terror. Shaukat Aziz left a thirty-year career as a senior Citibank executive to join a military regime in Pakistan, following a coup in 1999. Two years later, 9/11 made Pakistan a vital strategic ally in the War on Terror. This is an insider's account of what it was like to hold high office in a nuclear power in one of the most challenging parts of the world.First as finance minister, then prime minister, Aziz steered a major economic turnaround and negotiated Pakistan's aid package with the United States. He survived a suicide bombing by Al Qaeda, which drove him to engage in the fight against global terrorism.Aziz draws on his first-hand experiences in office, as well as hundreds of hours of interviews with the global players who shaped our world. From Donald Rumsfeld to General James Jones to Tony Blair, they give their take on the policy decisions of their time and the geopolitical environment today.From Banking to the Thorny World of Politics analyses Islamabad's relationship with Washington, its dealings with Afghanistan, Benazir Bhutto's fateful comeback, the attempted Kashmir peace settlement - and what Pakistan really knew about Osama Bin Laden's whereabouts.
Visa hela texten

Shaukat Aziz served as prime minister of Pakistan between 2004 and 2007, following five years as Pakistan's finance minister and thirty years at Citibank. While in office he steered one of the biggest economic turnarounds in recent history, taking Pakistan from the brink of bankruptcy. In 2001 he was named finance minister of the year by Euromoney and The Banker magazines. Anna Mikhailova is an award-winning journalist and interviewer for The Sunday Times. She has also written for Spectator LIFE and appeared as a guest presenter on ITV.