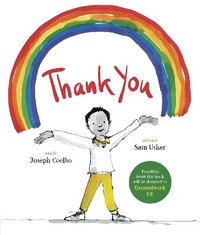 A story celebrating key workers and the NHS

av Joseph Coelho
Häftad Engelska, 2020-09-29
3-6 år
99
Köp
Spara som favorit
Finns även som
Visa alla 1 format & utgåvor
This touching children's book is a heartfelt and heartwarming tribute to the people who worked hard to keep us safe and keep society going during the global pandemic. Tatenda says thank you every day, wherever he can. Thank you to Mum and Dad for making breakfast, thank you to the post lady for delivering his favourite comic, thank you to his teacher for marking his work and thank you to the shop assistant stacking shelves. But lately, it seems no one can hear his thank yous: their heads are too foggy with worry. So Tatenda decides to say his biggest 'Thank you' ever. He stands on tiptoe, brings his arms down like a huge rainbow... and this time, his thank you helps the whole community feel better! This beautiful story from an award-winning author and illustrator team was inspired by the coronavirus pandemic and the NHS Thursday clap and helps to show children how they can celebrate the key workers in their lives. By buying a copy of this book you are making a donation of 3% of the retail price to Groundwork, a charity that helps some of the UK's most disadvantaged communities deal with the effects of the coronavirus pandemic.
Visa hela texten

"This is a book which will bear many repetitions, not least because we are all apt to forget the power of those two small words, spoken out loud and intentionally: 'Thank You'." * Books For Topics * "This touching and joyful picture book is a celebration of all the unsung heroes of our lives." * Booktrust * I'm yet to read anything written by Joseph Coelho that isn't a joy. His poetry is always considered, poignant and with great depth. The pairing with Sam Usher here is super - simple monochrome characters and settings which make the ribbon of colours that symbolise the 'thank you' seem to dance and leap off the page - it's so striking! The combined effect is powerful, and it's a wonderful tool for showing little ones how kindness and gratitude can touch others and ripple through our communities. * The Little Literacy Society *

Joseph Coelho is an award winning poet and performer from London, although he now lives by the sea. In 2019 he won the Independent Bookshop Week Picture Book Award for If All the World Were. He has been long-listed for The Carnegie Children's Award with his poetry collection 'Overheard In A Tower Block', which was also shortlisted for the CLPE CLiPPA Poetry Award and Longlisted for the UKLA Book Awards. He won the 2015 CLPE CLiPPA Poetry Award with his debut poetry collection Werewolf Club Rules. His debut Picture Book, Luna Loves Library Day was voted one of the nations favourite picture books by a survey led by World Book Day. His other poetry books include How To Write Poems and A Year Of Nature Poems . He has written plays for companies including: Soho Theatre, Polka Theatre, The Unicorn Theatre, Theatre Royal York, Oily Cart and The Spark Children's Festival to name a few. Joseph has been a guest poet on Cbeebies Rhyme Rocket, Radio 4's Poetry Playtime and Front Row. He is the presenter of BBC's Teach Poetry (Oct 2018) and features in DiscoveryEDUK's Poetry Curriculum Sam Usher spent most of his childhood reading, drawing and forgetting to do his schoolwork. His debut picture book, Can You See Sassoon?, was shortlisted for the Waterstones Children's Book Prize and the Red House Award. He has since written and illustrated We are Not Frogs by Michael Morpurgo (Barrington Stoke), Refuge by Anne Booth (Nosy Crow) and two of his own stories: Snow and Rain (Templar Publishing). He lives in London, where he enjoys trespassing and playing the piano.