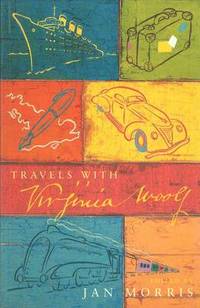 Virginia Woolf had a lively sense of place and delighted in 'lighting accidentally...upon scenes which would have gone on, have always gone on, will go on, unrecorded, save for this chance glimpse. Following Virginia's footprints from her beloved Sussex and Cornwall to wartime London, Italy and the Riviera to Greek mountains and the wilds of Spain, Jan Morris intersperses swift verbal sketches of a Greek peasant wedding, a fenland sky, an elderly spinster in a hotel dining room in Italy, or Bognor pier in the rain with her own brief, telling comments on both writer and subject.
Visa hela texten

Virginia Woolf was born in London in 1882, the daughter of Sir Leslie Stephen, first editor of the Dictionary of National Biography. From 1915, when she published her first novel, The Voyage Out, Virginia Woolf maintained an astonishing output of fiction, literary criticism, essays and biography. In 1912 she married Leonard Woolf, and in 1917 they founded the Hogarth Press. Virginia Woolf suffered a series of mental breakdowns throughout her life, and on 28 March 1941 she committed suicide. Jan Morris, who is Anglo-Welsh by parentage, divides her time between her library-house in North Wales, her dacha in the Black Mountains of South Wales, and travel abroad. Besides her acclaimed Pax Britannica trilogy, she has written books on Wales, Venice, Oxford, Spain, Manhattan, Hong Kong and Sydney, together with two autobiographical works, seven volumes of collected travel essays and the fictional Last Letters from Hav, which was shortlisted for the Booker Prize. She is an Honorary Doctor of Letters of the University of Wales, and she has recently published a book about Admiral 'Jacky' Fisher.