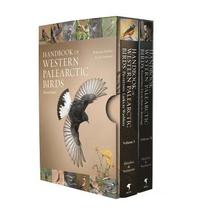 av Hadoram Shirihai, Lars Svensson
(7 röster)  |  Läs 2 recensioner
Mixed media product Engelska, 2018-07-26
1971
Köp
Spara som favorit
THE BRITISH BIRDS BOOK OF THE YEAR 2018 This unique and spectacular handbook is the most complete and comprehensive photographic guide to the passerines of the Western Palearctic. Written by two of the world's most respected ornithologists, Hadoram Shirihai and Lars Svensson, it contains the most up-to-date information available on bird identification covering all aspects of plumage, moult, ageing and sexing, with sections on voice and other identification criteria, and detailed taxonomic notes. The passerines are divided into two volumes, with the first covering larks, hirundines, pipits and wagtails, bulbuls, accentors, robins, chats, wheatears, thrushes, prinias and cisticolas, and warblers, and the second covering flycatchers, reedlings, tits, nuthatches, orioles and sunbirds, shrikes, corvids, finches and buntings, along with extreme vagrants. The exceptional text is backed up by a remarkable collection of more than 5,000 photographs, featuring a comprehensive range of plumages that illustrate every race and morph of each species in the region. This stunning handbook will be the definitive reference for the region for years to come - no birder's shelf will be complete without it.
Visa hela texten

The bird-book publishing highlight of 2018 ... This is now the definitive passerine guide for the Western Palearctic region. -- Andy Stoddart * Rare Bird Alert * It cannot be stressed enough just how much information is packed into this magnum opus. It is the new ultimate guide in Western Palearctic birding and is every bit worth the price tag. I cannot envisage that anyone who makes the investment will be left disappointed. -- Josh Jones * Birdwatch * Few books have generated such a buzz before being published ... this is one of the most important and potentially influential books of this decade. Its high standards shine through every page ... A top-quality publication. -- Yoav Perlman * Dutch Birding * A big book in every sense, co-authored by two juggernauts of Western Palearctic ornithology ... Destined to remain a standard-bearer well in to the future. * British Birds *

Hadoram Shirihai is Israel's foremost ornithologist and the author of books including the acclaimed Sylvia Warblersand A Complete Guide to Antarctic Wildlife. While his work, especially on tubenoses, has taken him to virtually every corner of the globe, his love of deserts and bird migration means that he is still to be found at Eilat, the watchpoint at the head of the Red Sea that he brought to the world's attention, virtually every spring. The scientific name of the Desert Tawny Owl (Strix hadorami), a species that has attracted his attention and research since he was a schoolboy, honours his devotion to Middle Eastern ornithology. The name Lars Svensson can truly be considered 'household' among European birdwatchers. His knowledge of Western Palearctic birds, in both field and museum, is second to none, and has resulted in two best-selling works synonymous with his name: his 'bible' for ringers, the Identification Guide to European Passerines, and the field guide to Western Palearctic birds, universally known simply as the Collins Bird Guide. During the extensive preparations for this book, his in-depth work yielded a brace of previously undescribed subspecies. He lives in southern Sweden.