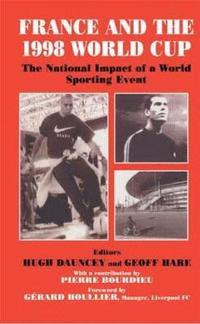 The National Impact of a World Sporting Event

The Scotsman - "A new book, France and the 1998 World cup is subtitled The National Impact of a World Sporting Event, and delivers a compelling and persuasive body of evidence to suggest France 98 was a significant landmark in the country"s 20th century history." The New Statesman - "France and the 1998 World Cup is written in the flat, unexcitable style of a sociology textbook, yet it eschews jargon and has a curious readability. It is particularly good on how nationalism finds expression on the sporting field, on how issues of culture and identity spiral as tightly as DNA around sport, on how football can take the form of a kind of surrogate war." TLS - "This enjoyable collection of essays edited by Hugh Dauncey and Geoff Hare describes the economic, cultural and sporting dimensions of organizing, and subsequently winning the World Cup." "While the question of whether a sporting event can change a nation remains unanswered, the book demonstrates that the 1998 World Cup is worthy of attention as much for its impact on contemporary France as for its football." Newcastle Upon Tyne Journal- "After the glut of bandwagon-jumping, hastily written, ill-informed and downright inaccurate glut of books about last year"s football World Cup, comes this thoroughly researched work." "Not only does France and the 1998 World Cup, a series of historical, cultural and sociological essays about the Coupe du Monde compiled by two Tyneside academics, examine last summer"s tournament but it puts it in the context of growth of French football." Four Four Two -"France"s victory, as Dauncey and Hare concede, kick-started French football and brought together a nation"s disparate elements under a common cause." Official Bulletin of UEFA, "A most informative study." The Journal -" After the glut of bandwagon-jumping, hastily-written, ill-informed, and downright inaccurate glut of books about last year"s football World Cup, comes this thoroughly researched work" Sociology of Sport Online- " The book represents an informative insight into the spectacle of France 98 from a variety of perspectives. It is well grounded in the event itself, with the chapters being able to be read chronologically or as individual essays. It therefore, could prove a very useful resource to students of globalisation, and the sociology of sport, which appears to be an expanding area of interest. However, it also provides an in-depth look at French culture and how it is reflected in national sporting organisations and attitudes...In this respect, the appeal of the book extends further than sport sciences, as it reaches to the students of French culture itself.