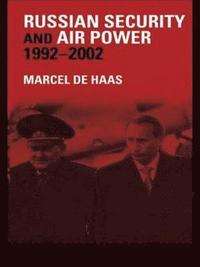 av Marcel De Haas
Inbunden Engelska, 2004-08-01
1369
Bevaka
Spara som favorit
Tillfälligt slut – klicka "Bevaka" för att få ett mejl så fort boken går att köpa igen.
This new book analyzes the security policy of the Russian Federation, internally as well as externally, on all levels of strategy. It describes military and political decision-making from Moscow's grand strategy to the use of a single fighter aircraft in Chechnya. In this analysis, Russia's air forces are used as a model for all services of the armed forces. The Chechen conflicts and NATO's security policy have been dominant factors in the development of Russia's security policy during the period 1992-2002. The use of air power in the Chechen conflicts is used here as a case study for testing political and military-strategic objectives. With regard to NATO's security policy, this study shows that the eastward enlargement of this alliance, as well as its use of force in Bosnia and Kosovo, have caused an increase in anti-Western tendencies in Russian security thinking.
Visa hela texten

'A very well researched analysis of, and reference to, the development of Russian political and military thought in the immediate post-Cold War era.' - RAF Air Power Review 'De Haas has written a book of great interest for anyone concerned with Russian security and defence policy ... Is worthy in itself and very usable as a platform for further empirical studies.' - Baltic Security and Defence Review

Marcel de Haas is an officer in the Royal Netherlands Air Force. Since September 2003 he has been posted at the NATO School, Oberammergau, Germany as Head of the Research Branch. He completed his MA in Russian Studies at Leiden University (1987) on 'Soviet Policy Towards Southern Africa' and his PhD at Amsterdam University (2004) on 'Russian Security Policy and Air Power 1992-2002'. He has published some 50 articles on Soviet, CIS and Russian security developments in the Journal of Slavic Military Studies, RAF Air Power Review and Officer magazine as well as in Dutch military-political journals. As an arms control inspector he has visited Russia and Belarus.