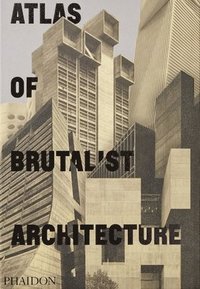 New York Times Best Art Book of 2018 - "Newcomers will discover the global influence of brutalism, that final age of civic architectural ambition; true believers can use it to prepare years of concrete-coated vacations."-The New York Times "Brutalism was mocked and misunderstood. But it produced some of the most sublime, awe-inspiring buildings on the planet."-Jonathan Meades, BBC TV "Brutalist architecture arouses passion and fury in equal measure."-Financial Times "It is damned by its name which comes from the French, beton brut, or raw concrete, but we use the same word (Brut) to describe Champagne and this perhaps sums up the dichotomy at the heart of this style."-Financial Times "A 560 page, oversized format book that deserves a place on every design and architecture nerd's coffee table."-Acquire "If you're down with concrete, check out Phaidon's latest book, Atlas of Brutalist Architecture. The stunning, 560-page coffee table tome shares more than 850 buildings, some which still exist and others that have been destroyed, that put the style on full display the world over."-Bloomberg "This is the only book to thoroughly document the world's finest examples of Brutalist architecture."-Architectural Digest Online "A new encyclopedia of brutalist buildings makes the case that the movement is making a comeback."-Curbed SF "Looks to the past, present and future of the style, revaluating the timeline and examining a deeper geopolitical context... Striking imagery and compelling text [reveal] a meaning far beyond the provocative aesthetics... Phaidon offers readers new perspectives on their everyday surroundings, encouraging individuals to re-evaluate the built environments."-Aesthetica "Considered a beauty by some and a beast by others, brutalism is back... Love it or hate it, brutalism has been a defining part of our landscape... One generation's eyesore, though, is another's fancy, and now brutalism is experiencing a resurgence... Brutalism is back to the Future once again."-Conde Nast Traveller "From eyesore to Instagram aesthetic... A book that maps the stark style's presence around the world... The book [...] was a mammoth undertaking. McLeod, an architect by training and a self-confessed fan of the style says it took her about two years to research and finalise the list."-The Hindu Weekend "Collects 850 examples from around the world, many of which were once dismissed as 'monstrosities'... Brutalism isn't a uniquely British or even European architecture style. Buildings following Brutalist principles are seen across the world, from churches in Canada to accommodation in Amsterdam, gymnasiums in Japan and hotels in Puerto Rico. As Phaidon's new book Atlas of Brutalist Architecture puts it: "Never has an architecture travelled so far, so fast"."-BBC.com/arts "Shines a light on this much-maligned architecture... An ambitious attempt to give brutalism a much wider scope and time frame, featuring almost 900 masterpieces from more than 100 countries."-Daily Telegraph, Property "Phaidon announce their latest photo-book-a global survey of Brutalist architecture, based around 878 buildings from 798 architects, and ranging across 102 countries. In its thick, heavy, and appropriately dense weight, the Atlas not only covers the 'big names' of Brutalism, but also its lesser well-known members and more recent practices and places that have been inspired by it."-Nowness.com "These buildings feature in Phaidon's book, Atlas of Brutalist Architecture, a monumental record of more than 850 Brutalist buildings found in over 100 countries."-TheCultureTrip.com

Conceived and edited by Phaidon Editors