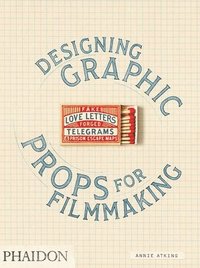 av Annie Atkins
Häftad Engelska, 2020-02-11
259
Bevaka
Spara som favorit
Tillfälligt slut – klicka "Bevaka" för att få ett mejl så fort boken går att köpa igen.
A behind-the-scenes look at the extraordinary and meticulous design of graphic objects for film sets Although graphic props such as invitations, letters, tickets, and packaging are rarely seen close-up by a cinema audience, they are designed in painstaking detail. Dublin-based designer Annie Atkins invites readers into the creative process behind her intricately designed, rigorously researched, and visually stunning graphic props. These objects may be given just a fleeting moment of screen time, but their authenticity is vital and their role is crucial: to nudge both the actors on set and the audience just that much further into the fictional world of the film.
Visa hela texten

"Annie makes the unreal seem hyperreal, and the real more supremely alive and utterly magical."-Jeff Goldblum "This is the notebook of an artisan who persistently moves forward on her own path-a wonderful guide demonstrating how on-screen realities are constructed out of forgery. After working as a production designer for many years, it's exciting to find a book dedicated to the essence of graphic design in film. It will be a great help to many juniors in the industry. No one should turn down the chance to peek inside a senior's notebook!"-Ha-jun Lee, Oscar-nominated production designer of Parasite "A delightful, zoomed-in look at the behind-the-scenes work that goes into making props for movies. A treat for graphic design geeks, film nerds, and all readers interested in the creative process."-Austin Kleon, The New York Times bestselling author of Steal Like an Artist "Annie Atkins has an extraordinary gift for inventing graphic design for things real and imagined. Her work elevates the mundane into the irresistible. As prop designer, she expertly transforms everyday documents, passports, letterheads, telegrams, milk bottle tops, street signs, prison escape maps, and tea stains into movie stars."-Louise Fili, graphic designer and author "As much a love letter to the magic of movie-making as it is a showcase for Atkins herself. She's passionate about the tiny, telling details... and just as passionate about the graft of her craft: there are spreads in her book devoted to everything from her collections of ephemera... to recipes for ageing paper... to top it off, the book opens with a love letter to Atkins herself from none other than Jeff Goldblum."-The Observer DESIGN supplement "When film-makers need a detailed artefact, they go the in-demand Welsh creator [Annie Atkins]."-The Guardian online "Letters, signs, books, all manner of products, you name it: if they're in a film, particularly one not set in the present, they're all specially created by a graphic designer, and behind all that design is star creator Annie Atkins."-Sunday Business Post Magazine "Dublin-based graphic designer Annie Atkins explores her role in helping create a believable narrative for some of the world's best-loved stories."-Design Week

Annie Atkins specializes in graphic design for filmmaking. Atkins designed the graphic props for Steven Spielberg's Bridge of Spies, Wes Anderson's The Grand Budapest Hotel and Isle of Dogs, and Todd Haynes's Wonderstruck, among other Hollywood films. Originally from Wales, Atkins is now based in Dublin, Ireland.