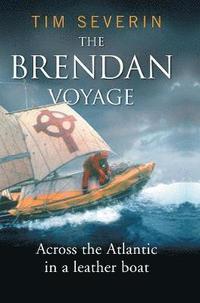 Across the Atlantic in a leather boat

av Tim Severin
(1 röst)
Häftad Engelska, 2005-05-01
194
Köp
Spara som favorit
It has been described as the greatest epic voyage in modern Irish history. Tim Severin and his companions built a boat using only techniques and materials available in the sixth-century A.D., when St Brendan was supposed to have sailed to America. The vessel comprised forty-nine ox hides stitched together in a patchwork and stretched over a wooden frame. This leather skin was only a quarter of an inch thick. Yet Severin and his crew sailed Brendan from Brandon Creek in Dingle to Newfoundland, surviving storms and a puncture from pack ice. The Brendan Voyage is Tim Severin's dramatic account of their journey. This new edition of a book already translated into twenty-seven languages introduces a new generation of readers to an enduring classic. Tim Severin didn't prove St Brendan reached America, only that he could have, that it was possible. Brilliantly written, The Brendan Voyage conveys unforgettably the sensation of being in a small, open boat in the vastness of the North Atlantic, visited by inquisitive whales, reaching mist-shrouded landfalls, and receiving a welcome from seafaring folk wherever the crew touched land.
Visa hela texten

Tim Severin is an explorer, traveller, author, film-maker and lecturer. In addition to The Brendan Voyage, he has also travelled in pursuit of the legends of Sinbad the Sailor, Jason and Argonauts, Ulysses, Genghis Khan, Moby Dick and Robinson Crusoe. He has won numerous book awards, the Gold Medal of the Royal Geographical Society, and the Livingstone medal of the Royal Scottish Geographical Society. He has Honorary Doctorates of Letters from University College Cork and Trinity College Dublin, and lives in West Cork.