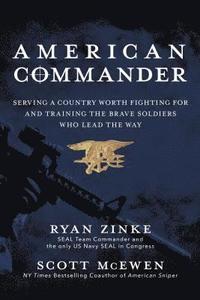 av Ryan Zinke, Scott Mcewen
Häftad Engelska, 2016-12-29
133
Köp
Spara som favorit
Skickas inom 5-8 vardagar.
Fri frakt inom Sverige för privatpersoner.
In recent years, the world has learned just what is required to bravely serve America through the navy's most elite SEAL Team. Now, for the first time, we hear from their commander. For more than half a decade, Ryan Zinke was a commander at the most elite SEAL unit. A 23-year veteran of the US Navy SEALs, Zinke is a decorated officer and earned two Bronze Stars as the acting commander of Joint Special Forces in Iraq. Zinke trained and commanded many of the men who would one day run the covert operations to hunt down Osama bin Laden and save Captain Phillips (Maersk Alabama). He also served as mentor to now famous SEALs Marcus Luttrell (Lone Survivor) and Chris Kyle (American Sniper). Written with #1 New York Times bestselling co-author of American Sniper, Scott McEwen, American Commander will offer readers the hard-hitting, no-nonsense style the SEALs are known for. When Zinke signs with the US Navy he turns his sights on joining the ranks of the most elite fighting force, the SEALs. He eventually reaches the top of the SEAL Teams as an assault team commander. Zinke shares what it takes to train and motivate the most celebrated group of warriors on earth and then send them into harm's way. Through it, he shares his proven problem-solving approach: Situation, Mission, Execution, Command and Control, and Logistics. American Commander also covers Zinke's experience in running for Montana's sole seat in the United States Congress. Zinke's passion for his country shines as he conveys his vision to revitalize American exceptionalism. Scott McEwen and Ryan Zinke take readers behind the scenes and into the heart of America's most-feared fighting force. American Commander will inspire a new generation of leaders charged with restoring a bright future for our children's children.
Visa hela texten

With a focus on giving back to the country that blessed him with so much, Ryan Zinke serves Montana as their sole Representative in the United States House. As a Navy SEAL, State Senator and now Congressman, Ryan took the same oath to defend the Constitution of the United States, and he takes that oath seriously. His distinguished military career began in 1985 when he graduated from Officer Candidate School and attended SEAL training (BUDS class 136). He was first assigned to SEAL Team ONE in Coronado, CA, then was later selected for SEAL Team SIX where he was a Team Leader and a commander. After over a decade of exemplary service, Ryan was assigned as Deputy and Acting Commander of Combined Joint Special Operations for Operation IRAQI FREEDOM where he led a force of over 3,500 Special Operations personnel in Iraq. In 2006 he was awarded two Bronze Stars. He retired from active duty 2008 after serving 23 years as a US Navy SEAL. After retiring from the Navy, Ryan ran for Congress and was elected by a 15-point margin. Ryan was sworn in to the House of Representatives on January 6, 2015 and became the first Navy SEAL in the House.