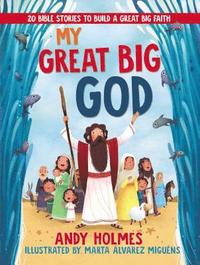 av Andy Holmes
Kartonnage Engelska, 2017-08-24
149
Köp
Spara som favorit
Skickas inom 3-6 vardagar.
Fri frakt inom Sverige över 159 kr för privatpersoner.
My great big God takes care of me! My great big God loves me! Find out just how great and big God really is in this adorable Bible storybook for little ones. Bestselling author Andy Holmes takes children on a special journey through 20 of the most loved and known stories in the Bible that illustrate the character of God. Each story is told in adorable rhymes and ends with a fresh takeaway that even the youngest child will understand: My great big God is good! My great big God is powerful! Parents and children alike will love to read these stories together and learn about how wonderful our God is. With bright, eye-catching illustrations by Marta Alvarez Miguens and thick pages perfect for little hands to hold, My Great Big God will be a family favorite for years to come.
Visa hela texten

Andy Holmes was born in Memphis, TN, in 1961 and moved with his family to Abilene, TX, in 1968. Andy Holmes is the author of over fifty books, illustrating many of them as well. Andy Holmes created the internationally seen children's television series "Gerbert" and was the series' writer, performer as well as co-wrote the songs. Andy Holmes was awarded the Excellence In Children's Ministry National Award by the International Network of Children's Pastors, was nominated for an Ace Award for his work with the "Gerbert" television series, and won a Telly Award for his work on the triple-cast show "NetTalk Interactive". Marta Alvarez Miguens is a children's book illustrator in La Coruna (Spain). Her artwork is characterized by happy colors and cute children and animals with red, healthy cheeks. In her spare time, Marta loves playing with her three cats, walking in the woods, watching movies, and drinking a cup of coffee with her friends.