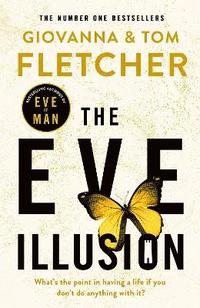 av Giovanna Fletcher, Tom Fletcher
Inbunden Engelska, 2020-04-16
130
Köp
Spara som favorit
Skickas inom 5-8 vardagar.
Gratis frakt inom Sverige över 159 kr för privatpersoner.
Finns även som
Visa alla 3 format & utgåvor
THE SECOND BOOK IN THE BESTSELLING EVE OF MAN TRILOGY AND NO. 1 SUNDAY TIMES BESTSELLER - EVE AND BRAM HAVE ESCAPED, BUT CAN THEY SURVIVE? Eve is the last girl on earth. For the last sixteen years, Eve has been a prisoner. Guarded by the Mothers. Trapped by her fate. Watched by the world. Until she took her chance, and escaped. Eve finally has the freedom she has wanted for so long, and with Bram she has the love. But both come at a price. In this dangerous new world beyond the Tower, the regime is only ever one step behind. And, together with the desperate rebel group fighting against them, Eve has found herself in more danger than she ever could have imagined. With everything stacked against them, can Eve and Bram survive? Praise for Eve of Man 'A Hunger Games-esque novel . . . a compelling read' The Mail on Sunday 'Set in a dystopian future that has seen no girls born for 50 years . . . This promises to be one of the big books of the year. You'd be a fool to miss it' Heat 'This chilling dystopia is at heart a love story, and the vivid characterisation has you rooting for the duo from page one' CHILDREN'S BOOK OF THE MONTH Mail on Sunday 'A thoughtful, and excellent read' The Sun 'A brilliant premise, very well executed' The Daily Express
Visa hela texten

This dystopian novel has an air of Hunger Games about it and we love it * Yahoo! Style * A Hunger Games-esque novel . . . a compelling read * The Mail on Sunday * Eve holds the fate of the human race in her hands . . . This chilling dystopia is at heart a love story, and the vivid characterisation has you rooting for the duo from page one * The Mail on Sunday, CHILDREN'S BOOK OF THE MONTH * Their first joint book, Eve is forced to decide between love and the fate of humanity * OK! * Set in a dystopian future that has seen no girls born for 50 years . . . This promises to be one of the big books of the year. You'd be a fool to miss it * Heat * Praise for Eve of Man * - * Fans of The Hunger Games will relish this high-octane tale of love and survival against the odds * Daily Mail * The Fletchers have weaved in an apocalyptic nightmare, a daring escape and a passionate love story * Sunday Times *

Giovanna Fletcher is a number 1 bestselling author and podcast creator. With 11 titles under her belt so far, she is one of the UK's most successful women's fiction authors; she has also written two non-fiction works focusing on parenting and motherhood. Her podcast Happy Mum, Happy Baby has over 7 million downloads to date and has featured a range of celebrity guests, including the Duchess of Cambridge. Giovanna is an ambassador for The Prince's Trust, a patron for CoppaFeel!, and she also works closely with Tommy's and Save the Children. In 2020 she was crowned I'm A Celebrity Get Me Out Of Here's Queen of The Castle. Tom Fletcher is a number one bestseller and one of the UK's most popular children's authors. The Christmasaurus was the biggest debut middle-grade novel of 2016 and was shortlisted for a British Book Award, since then Tom has published several more chart-topping children's novels including The Creakers, The Christmasaurus and the Winter Witch and the instant number one bestseller The Danger Gang. Tom also writes the incredibly successful Who's in Your Book? picture book series, and is one half of the author duo behind the Dinosaur that Pooped picture book series too, which has sold over 1.5 million copies. For older readers, Tom co-authors the Eve of Man series with his wife Giovanna Fletcher. Tom's books have been translated into thirty-five languages and to date he has sold over 2.5 million copies of his books in the UK alone. He is also a music-making, song-writing, guitar-playing, Guinness World Record-holding, nappy changing, galaxy-defending dad!