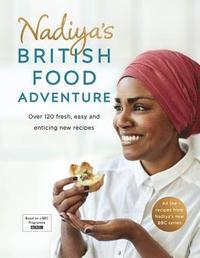 Beautiful British recipes with a twist, from the Bake Off winner & bestselling author of Time to Eat

av Nadiya Hussain
Inbunden Engelska, 2017-07-13
219
Köp
Spara som favorit
Skickas inom 5-8 vardagar.
Fri frakt inom Sverige för privatpersoner.
'National treasure' Independent Let Nadiya take you on a culinary journey across Britain and discover over 120 fresh, simple and delicious recipes. INCLUDES ALL THE RECIPES AND MORE FROM THE HIT BBC2 COOKERY SERIES ____________ Inspired by her journey around the country to discover the best In British food, Nadiya has created over 120 easy and enticing new recipes that mix local ingredients with her very favourite flavours, not forgetting a nod to her Bangladeshi roots. Whip-up classic British dishes with a twist such as: * Cayenne eggs benedict, soft poached eggs on an English muffin with smoked turkey rashers and cayenne hollandaise sauce. * A quick and easy grilled aubergine and feta tart on flaky, buttery puff pastry. * A West Indian tropical hit of fruity, fragrant pink peppercorn pineapple jam to top sweet scones and coconut cream. The ultimate exotic treat. Her reinvented classics capture the diversity of twenty-first century Britain - of tastes and culinary influences that shape what we love to cook and eat today. Nadiya's must-try recipes have got you covered from breakfast through to supper, whether you need fast mid-week meals, lunch on the go, something a little bit special, or gorgeous pudding or party ideas. Motivated by her love of family and food, flavour and fun, this is Nadiya cooking in the way she knows best - inspiring the rest of us to do the same. __________ 'The best kind of cookbook . . . you can read it like a novel' The Times 'She baked her way into our hearts and hasn't stopped since' Prima
Visa hela texten

The best kind of cookbook . . . you can read it like a novel * The Times * Nadiya's British Food Adventure - now infamous for its crispy chocolate and peanut tart, masala eggy bread and fish pie with cinnamon sweet potato * The Sunday Times * She baked her way into our hearts and hasn't stopped since . . . The cookbook charts her love affair with British food * Prima *

Nearly 15 million viewers tuned in to see Nadiya win 2015's Great British Bake Off, and she has gone on to capture the heart of the nation. A columnist for The Times, Nadiya is also a regular reporter for The One Show, a guest panelist on Loose Women, and presented BBC1's The Chronicles of Nadiya which aired to fantastic reviews in 2016. Nadiya's new eight-part series, Nadiya's British Food Adventure, is airing on BBC2 throughout this summer, and later in the year she will co-host BBC2 show The Big Family Cooking Showdown. Born in Luton to British Bangladeshi parents, Nadiya now lives in Milton Keynes with her husband, Abdal, and their three children. Her first cookbook, Nadiya's Kitchen, was published in 2016. She has also authored a children's cookbook and a novel, and famously baked the Queen's 90th birthday cake.