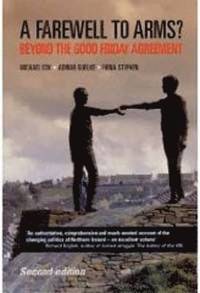 A Farewell to Arms?

Beyond the Good Friday Agreement

av Michael Cox, Adrian Guelke, Fiona Stephen
Inbunden Engelska, 2006-01-01
829
Köp
Spara som favorit
Skickas inom 7-10 vardagar.
Fri frakt inom Sverige för privatpersoner.
Finns även som
Visa alla 1 format & utgåvor
The signing of the Good Friday Agreement in 1998 appeared to open up a new phase in the history of Northern Ireland and indeed world politics generally. Hailed from the outset as a model that would inspire peace processes in other countries, it sought through careful negotiation and delicate compromise to bring to a conclusion a conflict that had cost over 3600 lives, damaged Britain's international position and at times come very close to undermining relations between the UK and Ireland. While the peace has held it is obvious that serious divisions continue to make a final settlement of the Northern Irish question very difficult. This comprehensive and original study is the first to explain in detail how the Good Friday Agreement ran into trouble, why we are still some way from a final settlement, but why a return to war is most unlikely - even in an age where global terror now threatens world order more seriously than at any time in the past. This new edition of an established, authoritative text will be essential reading for students, researchers and academics of Irish politics, conflict and peace studies, and international relations. -- .
Visa hela texten

"'... an authoritative, comprehensive and much-needed account of the changing politics of Northern Ireland - an excellent volume.' Richard English, author of Armed struggle: The history of the IRA"

Bloggat om A Farewell to Arms?

Michael Cox is Professor of International Relations at the LSE. Adrian Guelke is Professor of Comparative Politics and Director of the Centre for the Study of Ethnic Conflict at The Queen's University of Belfast. Fiona Stephen has recently completed a study on the politics of integrated education in Northern Ireland based on her doctoral research undertaken at The Queen's University of Belfast -- .