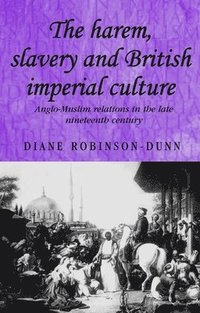 av Diane Robinson-Dunn
Häftad Engelska, 2014-06-30
289
Köp
Spara som favorit
This book focuses on British efforts to suppress the traffic in female slaves destined for Egyptian harems during the late nineteenth century. It considers this campaign in relation to gender debates in England, and examines the ways in which the assumptions and dominant imperialist discourses of these abolitionists were challenged by the newly established Muslim communities in England, as well as by English people who converted to or were sympathetic with Islam. While previous scholars treated antislavery activity in Egypt first and foremost as an extension of earlier efforts to abolish plantation slavery in the New World, this book considers it in terms of encounters with Islam during a period which it argues marked a new departure in Anglo-Muslim relations. This approach illuminates the role of Islam in the creation of English national identities within the global cultural system of the British Empire. This book will appeal to those with an interest in British imperial history; Islam; gender, feminism and women's studies; slavery and race; the formation of national identities; global processes; Orientalism; and Middle Eastern studies. -- .
Visa hela texten

'Lucid and innovative ...highly original ...well-researched, well-written and well-argued, proving a great addition to our knowledge of the effects of empire on metropolitan society. Robinson-Dunn ...brings to life some rich historical episodes and actors.' Benjamin Hopkins, Professor of History and International Affairs at the George Washington University 'Timely and relevant ...a striking addition to an interactive imperial historiography ...a very important work.' John MacKenzie, eminent historian, founder of the Studies in Imperialism series and Professor Emeritus at Lancaster University 'Stimulating ...a novel twist on the way in which the connections between metropole and empire during this period have usually been approached and discussed.' Sarah Ansari, Professor of History at Royal Holloway College, University of London 'A wonderful book which bridges Egyptian and imperial history.' Beth Baron, Professor of History and Director of the Middle East and Middle Eastern American Center, Graduate Center, City University of New York 'A straightforward and engaging piece of historical research ...spirited and well-documented.' William Clarence-Smith, Professor of History at the School of Oriental and African Studies, University of London -- .

Diane Robinson-Dunn is a Professor of History at the University of Detroit Mercy -- .