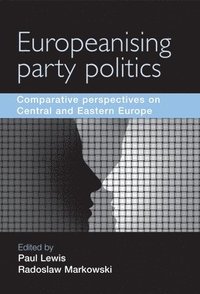 av Paul Lewis, Radoslaw Markowski
Inbunden Engelska, 2011-07-01
979
Köp
Spara som favorit
The book is a comparative, empirically based study of party politics in contemporary Central and Eastern Europe that seeks to define the impact of European Union membership in this area. The question of Europeanisation has been intensively debated over recent years, but no firm conclusion has been reached. This collection of rigorously comparative contributions directs attention to a number of key areas in the attempt to isolate cases where Europe has made a difference. Successive chapters examine how new parties are managed by the state and the ways in which parties colonise the state itself, the role of transnational cooperation and the influence pan-European parties have on national organisations. The book goes on to consider patterns of party-oriented participation in the new democracies and dimensions of electoral turnout, dimensions of inter-party competition and identification of the specific features of post-communist party politics, examination of the key case of the extreme right and the conditions under which it tends to emerge, detailed analysis of the quality of political representation in the new democratic context, and discussion of how EU constraints are likely to undermine the prospects of stable party linkages. A conclusion seeks to establish how far Europe and EU policy has succeeded in influencing Central and East European developments. -- .
Visa hela texten

Paul Lewis is Professor of European Politics at the Open University. Radoslaw Markowski is Director of the Polish National Election Study at the Institute of Political Studies, Polish Academy of Sciences. -- .