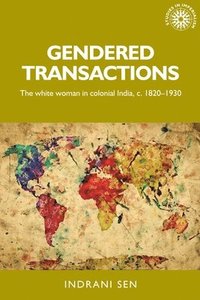 av Indrani Sen
Inbunden Engelska, 2017-02-21
1079
Köp
Spara som favorit
Finns även som
Visa alla 2 format & utgåvor
This book seeks to capture the complex experience of the white woman in colonial India through an exploration of gendered interactions over the nineteenth and early twentieth centuries. It examines missionary and memsahibs' colonial writings, both literary and non-literary, probing their construction of Indian women of different classes and regions, such as zenana women, peasants, ayahs and wet-nurses. Also examined are delineations of European female health issues in male authored colonial medical handbooks, which underline the misogyny undergirding this discourse. Giving voice to the Indian woman, this book also scrutinises the fiction of the first generation of western-educated Indian women who wrote in English, exploring their construction of white women and their negotiations with colonial modernities. This fascinating book will be of interest to the general reader and to experts and students of gender studies, colonial history, literary and cultural studies as well as the social history of health and medicine. -- .
Visa hela texten

'Sen combines her various research areas in the field . from the perspective of "gendered transactions" over . diverse topics such as missionary and civilizing mission by white women, social reform and women's education, English-speaking Literature of female actors and the complex relationships between British and Indian women and the memsahib. The various sources . are remarkable. memoirs, letters, diaries, biographies, newspaper articles, novels, household manuals and medical guides. . Sen makes an important contribution to the feminist historiography of colonial India by placing the diverse voices of European and Indian women at the center of their analysis.' Manju Ludwig, Heidelberg, H.Soz. Cult (trans.) 'Sen's book has presented an extremely accessible account of white womens' experiences from the zenana to the colonial home to the barracks, all within an intricate web of gender, race and class relations.' Zoya Sameen, University of Chicago, Social History 'Sen brings out a perspective that is often doubly neglected in writings on India: the voice of colonised women.Sen's research uses an impressively wide array of sources, which is particularly apparent in her work in the colonial archives digging up medical manuals available to colonial doctors, Sen demonstrates how resolutely imperial and prescriptive of women's roles they were.The analysis of these transactions is useful and revealing. Sen's work is a good reminder that white women in India did not work and live entirely separately from Indian life. They were also, crucially, not the only ones who were imagining the world around them, and Sen's work on 'Returning the 'gaze' across the racial divide is particularly welcome.' James Watts, University of Bristol, Ex-Historia 'This excellent interdisciplinary study contributes to the fields of gender, literature, culture and social history of medicine in colonial India. a product of rigorous research of sources across genres. Sen's main aim is to provide fascinating, contradictory and multilayered constructions of white women in colonial India. She focuses on the complex experiences of three groups of such women, missionaries, memsahibs (middle-class white women, mostly administrators' wives) and, to a lesser extent, ordinary soldiers' wives. Sen's book skilfully tackles problematic questions about identity and agency in cross cultural encounters of white women in colonial India from various angles of gender, 'race', class, caste, region and religion.. The richness, cogency and clarity of the narrative is based on a thorough survey of literary and non-literary primary sources, as well as a wide range of secondary sources, to reveal the violence underlying initiatives of colonial modernity based on westernising and 'civilising missions' and 'ideals' of 'respectability' and well-being . Gendered Transactions is not only invaluable for students with a literature and history background at undergraduate and postgraduate levels, but also a pleasurable and informative read for a wider audience.' Ranjana Saha, Indian Institute of Science Education and Research, Mohali, India, South Asia Research Vol. 32 (2) July 2019 'Gendered Transactions is a unique contribution to the gendered dimension of empire and is a valuable addition to Sen's earlier studies.' Shilpi Rajpal, Social Scientist, Vol 48, Nos. 3-6, March-June 2020 -- .

Indrani Sen is Associate Professor in the Department of English at Sri Venkateswara College, Delhi University -- .