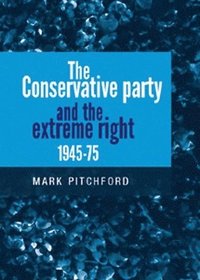 The Conservative Party and the Extreme Right 1945-1975

Pitchford has, for the first time, brought together details of the myriad groups that exisited on the Party's Right in the 30 years after the end of the Second World War. Pitchford treats the reader to an investigation of organizations well beyond the usual suspects of the National Front and the Monday Club. ...the first detailed research on these matters in the Conservative Party's own archives and has produced an original and valuable account of the process by which Tory strategists sought to marginalise nationalist and other 'extremist' movements both by purging their own ranks and by incorporating a sanitised version of the nationalist agenda. -- .