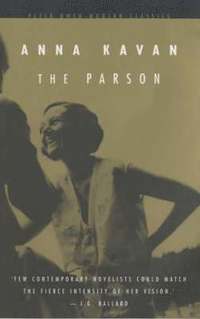 av Anna Kavan
Häftad Engelska, 2001-09-01
116
Köp
Spara som favorit
Skickas inom 5-8 vardagar.
Gratis frakt inom Sverige över 159 kr för privatpersoner.
Finns även som
Visa alla 1 format & utgåvor
The Parson was not published in Anna Kavan s lifetime, but found after her death in manuscript form. Thought to have been written between the mid 50s and early 60s, it presages, through its undertones and imagery, some of Kavan s last and most enduring fiction (such as Ice). It was published finally, to wide acclaim, by Peter Owen in 1995. The Parson of the title is not a cleric, but an upright young army officer so nick-named for his apparent prudishness. On leave in his native homeland, he meets a rich and beguiling beauty, the woman of his dreams. The days that the Parson spends with Rejane, riding in and exploring the wild moorland have their own enchantment. But Rejane grows restless in this desolate land; doubtless in love with the Parson, she discourages any intimacy. Until that is, she persuades him to take her to a sinister castle situated on a treacherous headland. Thisis less a tale of unrequited love than exploration of divided selves, momentarily locked in an unequal embrace. Passion is revealed as a play of the senses as well as a destructive force. There have been valid comparisons to Poe, Kafka, and Thomas Hardy, but the presence of her trademark themes, cleverly juxtaposed and set in her risk-taking prose, mark The Parson as 100% Kavan."
Visa hela texten

"A writer of such chillingly matter-of-fact, unself-pitying vigor that her vision transcends itself." New Yorker"

Anna Kavan was one of the greatest unsung enigmas in 20th-century British literature. Born asHelen Ferguson, who lived a fraught childhood and two failed marriages led her to change her name to that of one of her characters. Despite struggling with mental illness and heroin addiction for most of her life, she was still able to write fiction that was as powerful and memorable as any English female writer of the last 150 years."