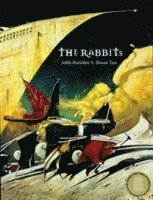 John Marsden is one of the most popular writers of young adult fiction. His books have sold more than three million copies worldwide and he has won or been shortlisted for every major award for children's and young adult literature in Australia, including CBCA Children's Book of the Year and Picture Book of the Year, the National Book Award and numerous others. After more than thirty books he is arguably one of the best known and most respected novelists for young adults. He lives near Melbourne, where he is Principal of Candlebark School. Shaun Tan grew up in the northern suburbs of Perth, Western Australia. He graduated from the University of WA in 1995 with joint honours in Fine Arts and English Literature, and currently works full time as a freelance artist and author. He lives in Melbourne with his partner Inari Kiuru and a small yellow parrot. Shaun began drawing and painting images for science fiction and horror stories in small-press magazines as a teenager, and has since become best known for illustrated books that deal with social, political and historical subjects through surreal, dream-like imagery.