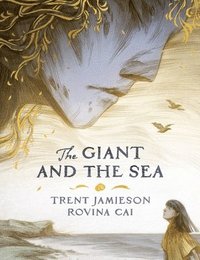 The Giant and the Sea

av Trent Jamieson
Inbunden Engelska, 2020-05-26
3-6 år
179
Bevaka
Spara som favorit
Tillfälligt slut – klicka "Bevaka" för att få ett mejl så fort boken går att köpa igen.
Finns även som
Visa alla 1 format & utgåvor
A giant stands on the shore, watching the sea. She never moves, never speaks, until the day she turns to a little girl and says, 'The sea is rising.' The brave girl takes the message to the town. But when the people refuse to listen, the giant must find another way to save them. Perfect for the children of the Climate Strike, this is a lyrical and deeply moving story about climate change, standing up for what you believe in, and the power of hope. Winner of the 2021 Environment Award for Children's Literature.
Visa hela texten

A book that will hopefully awaken the giant within everyone, The Giant and the Sea is a powerful tale of climate change, self-belief and hope for a positive future. It is a fairytale for those who need to believe that we can change. * West Australian * Wonder at the lyrical text and divine illustrations in this astonishing hardback book. * The Australian Women's Weekly * ..charming, beautifully illustrated work that is a fable about climate change without being too polemical * QLD [PRINT] Courier Mail [AUDIENCE: 166,502 ASR: AUD 18,530] * The giant issue of climate change is translated for youngsters via powerful art by Melbourne's Rovina Cai alongside Trent Jamieson's simple, moving storyline. The giant watching over the sea warns of disaster as water levels rise. A little girl listens and urges people in the city to turn off the machine. But they laugh and ban the giant from the shore. Adults will be able to guess the rest of the story ... with its lesson for kids on standing up to protect our planet. * NATIONAL [PRINT] Herald Sun [AUDIENCE : 306,571 ASR: AUD 11,534] * Down by the seashore a giant stands, looking across the water, as she had been doing for a very long time. On the same shore a little girl plays and sings, and the giant is listening but never speaks. Then one day the giant breaks her silence, looks at the little girl and says, 'The sea is rising'. She asks the little girls to go to the city and tell the people if the dangers. But the people laugh, and many become angry. Nothing happens for many months but one day something does. After reading this stunningly beautiful book, with its lyrical text, I would hope that every child, and adult, can share my experience. For once it is read it will never be forgotten. -- Merls Morcom * Good Reading magazine * QLD [Print] * The Chronicle * A lyrical and deeply moving story that touches on important themes for today's children, including climate change, standing up for what you believe in, and the power of hope. * My Child Magazine * Oh, wow! A HUGE Wow. A powerful and breathtaking wow... Lovers of picture books that make you think and reflect will adore The Giant and the Sea. It sits on the shelf with books like Our Little Inventor, Pea Pod Lullaby and Girl on Wire. -- Shaye Wardrop * Kids Book Review * Wonder at the lyrical text and divine illustrations in this astonishing hardback book. * NATIONAL [PRINT] Australian Women's Weekly *

Trent Jamieson (Author) Trent Jamieson is an editor, bookseller and award-winning writer of science fiction and fantasy, including the Death Works series and Roil duology. His 2015 novel, Day Boy, won the Aurealis Award for Best Fantasy Novel 2015, Aurealis Award for Best Horror Novel 2015, shortlisted for the Ditmar Award for Best Novel 2016 and Courier-Mail's People's Choice Queensland Book of the Year 2016, and longlisted for the International DUBLIN Literary Award 2017. He has published over 70 short stories, two of which have won prestigious Aurealis Awards. Rovina Cai (Illustrator) Rovina Cai is an illustrator from Melbourne, Australia. Her illustrations evoke a sense of intrigue; images that make you linger, hungry to know the story behind them. She has a degree in Communication Design from RMIT University in Melbourne, Australia, and an MFA in Illustration as Visual Essay at the School of Visual Arts in New York City. Tintinnabula, her first picture book, with acclaimed author Margo Lanagan, was published in 2017 and won the CBCA Crichton Award for New Illustrators. Her work can be seen at rovinacai.com.