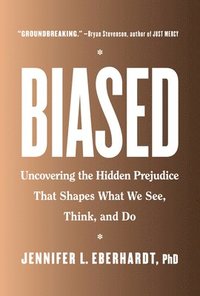 Uncovering the Hidden Prejudice That Shapes What We See, Think, and Do

From one of the world's leading experts on unconscious racial bias, a personal examination of one of the central controversies and culturally powerful issues of our time, and its influence on contemporary race relations and criminal justice.

We do not have to be racist to be biased. With a perspective that is both scientific, investigative, and also informed by personal experience, Eberhardt offers a reasoned look into the effects of implicit racial bias, ranging from the subtle to the dramatic. Racial bias can lead to disparities in education, employment, housing, and the criminal justice system--and then those very disparities further reinforce the problem. In Biased, Eberhardt reveals how even when we are not aware of bias and genuinely wish to treat all people equally, ingrained stereotypes can infect our visual perception, attention, memory, and behavior.

Eberhardt's extensive work as a consultant to law enforcement, as well as a researcher with unprecedented access to data including footage from police officers' body-worn cameras, informs every aspect of her book and makes it much more than a work of social psychology. Her research occurs not just in the laboratory but in police departments, courtrooms, prisons, boardrooms, and on the street. Interviews are interwoven with memories and stories from Eberhardt's own life and family. She offers practical suggestions for reform, and takes the reader behind the scenes to police departments implementing her suggestions. Refusing to shy away from the tragic consequences of prejudice, Eberhardt addresses how racial bias is not the fault of nor restricted to a few "bad apples" in police departments or other institutions. We can see evidence of bias at all levels of society in media, education, and business practices. In Biased, Eberhardt reminds us that racial bias is a human problem--one all people can play a role in solving.
Visa hela texten