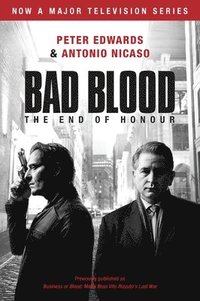 Montreal godfather Vito Rizzuto sat helpless in a Colorado penitentiary while learning that unidentified assassins had killed his eldest son, and likely heir, and then murdered his father. Subsequent deaths of Vito's loyal associates filled the news throughout hissentence. From their comfortable base in the Toronto area, the Calabrian 'Ndrangheta seemed the obvious culprits; but, as internationally bestselling crime writers Peter Edwards and Antonio Nicaso reveal in this compelling and far-reaching investigation, many unseen hands were at work. In 2012, Vito Rizzuto emerged from prison, a sixty-six-year-old man who could carefully reconstruct his crime family or damn the consequences and punish his betrayers. From the events leading to his imprisonment, through the bloodshed following his release, to his mysterious death in 2013 and morerecent efforts to continue his family's dominance, Bad Blood is the final word in the story of a twenty-first-century criminal mastermind.
Visa hela texten