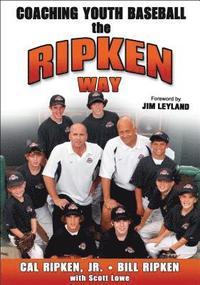 av Jr Ripken Cal, Bill Ripken, Scott Lowe
Häftad Engelska, 2006-12-01
199
Köp
Spara som favorit
Coaching young players, developing their skills, and cultivating a love for the sport may be the most rewarding experience baseball can offer. Cal and Bill Ripken understand this like few others. From their father, Cal Sr., a legend in the Baltimore Orioles organization for 37 years, they learned to play the game the right way. Those lessons, paired with their combined 33 years of big league experience, helped develop the Ripken Way, a method of teaching the game through simple instruction, solid explanations, encouragement, and a positive atmosphere. In Coaching Youth Baseball the Ripken Way, Cal and Bill share this approach to coaching and development. Whether you're teaching your children at home, managing the local travel team, or working with high school-level players, Coaching Youth Baseball the Ripken Way will help you make a difference both on and off the field, with these features: More than 50 drills covering defense, hitting, pitching, and baserunning Age-specific practice plans for players ranging from 4 to 15+ Strategies for setting goals and reasonable expectations for your players and team Advice on communicating with parents, players, and staff Methods for creating a positive and fun environment in which kids can learn the skills and strategies of the game Bill Ripken was once voted by his peers as one of the big league players most likely to become a manager. Cal Ripken, Jr., known as baseball's Iron Man, is a member of the game's All-Century Team and a future Hall of Famer. Together, they are proof positive that the Ripken Way is the right way to teach the game of baseball.
Visa hela texten

Cal Ripken, Jr., is baseball's all-time Iron Man. He retired from baseball in October 2001 after 21 seasons with the Baltimore Orioles. His name appears in the record books repeatedly, most notably as one of only eight players in history to record more than 400 home runs and 3,000 hits. In 1995, Ripken broke Lou Gehrig's record for consecutive games played (2,130) and voluntarily ended his streak in 1998 after playing in a world-record 2,632 consecutive games. Among his other on-field accolades are American League Rookie of the Year (1982), two-time American League Most Valuable Player (1983, 1991), two-time Gold Glove recipient (1991, 1992), two-time All-Star Game MVP (1991, 2001), and 19 All-Star Game selections. He also was named to Major League Baseball's All-Century Team in 1999. Ripken has made a tremendous impact on the sport and on fans everywhere. In 1999, Babe Ruth League, Inc., changed the name of its largest division (5- to 12-year-olds) from Bambino to Cal Ripken Baseball. Currently, more than 700,000 youths play Cal Ripken Baseball worldwide. He is using the platform that baseball has provided him to construct a baseball complex in his hometown of Aberdeen, Maryland. The one-of-a-kind facility consists of Ripken Stadium, a state-of-the-art 6,000-seat minor league ballpark that is home to the hugely successful Class A Aberdeen IronBirds. Adjacent to the minor league ballpark is the Ripken Youth Baseball Academy, consisting of eight youth fields, including a youth-sized replica of Oriole Park at Camden Yards, a synthetic training infield, a bullpen area, and batting cages. Ripken resides in Maryland with his wife, Kelly, and their children, Rachel and Ryan. Bill Ripken, a 12-year Major League veteran, began his career with the Baltimore Orioles in 1987 under the direction of his father, Cal Ripken, Sr., and alongside brother Cal Ripken, Jr. This was the first and remains the only time in Major League Baseball history that a father simultaneously managed two of his sons. After five and a half seasons with the Orioles, Ripken, who would later return to Baltimore for a year, played for Texas, Cleveland, and Detroit. In 1988, he was second among American League second basemen in double plays turned (100). At the plate, Ripken led the Baltimore Orioles in hitting with a .291 average and 28 doubles in 1990. Ripken, a second baseman by trade, had a fielding percentage of .9927 in 1992, the best of any Major League second baseman that season, and his career fielding percentage at second base (.987) ranks among baseball's all-time leaders. Ripken was voted by his peers as one of the players most likely to manage a big league team. Ripken is the co-owner and executive vice president of Ripken Baseball Inc., a baseball sales and marketing company founded in 1999 and based in Baltimore. Ripken is involved in all aspects of the business and regularly instructs at youth camps and coaching clinics. Through his work with these programs, he has become recognized as one of America's premiere baseball instructors. Ripken also is involved in the continued development of the Ripken Academy in Aberdeen, Maryland, and the management of Ripken Baseball's minor league teams in Aberdeen and Augusta, Georgia. Ripken lives in Fallston, Maryland, with his wife, Candace, and his children, Miranda, Anna, Reese, and Jack. Scott Lowe joined Ripken Baseball in 1999 after eight years working in college sports publicity. Lowe initially served as the general manager of the company's camps and clinics division, developing Ripken Baseball's youth camps, coaching clinics, and other instructional programs. Presently he writes and designs Ripken Baseball's Coach's Clipboard e-newsletter, which is distributed to amateur baseball coaches around the world on a monthly basis. He also oversees the creation and distribution off Ripken Baseball instructional products and is involved in the development and implementation of the company's coaching educati