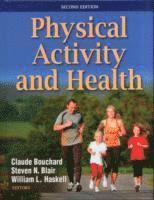 "With the vast number of topics it covers as well as the examples of the practical application of the underlying principles it presents, this book is an excellent learning and teaching resource." -- Doody's Book Review (5 star review)

Claude Bouchard, PhD, is the director of the Human Genomics Laboratory at Pennington Biomedical Research Center, a campus of the Louisiana State University System, where he also holds the John W. Barton Sr. chair in genetics and nutrition. He was director of the Physical Activity Sciences Laboratory at Laval University, Quebec City, Canada, for over 20 years. Dr. Bouchard holds a BPed from Laval University, an MSc in exercise physiology from the University of Oregon at Eugene, and a PhD in population genetics from the University of Texas at Austin. For four decades, his research has dealt with the role of physical activity, and the lack thereof, on physiology, metabolism, and indicators of health, taking into account genetic uniqueness. He has performed research on the contributions of gene sequence variation and the benefits to be expected from regular activity in terms of changes in cardiovascular and diabetes risk factors Dr. Bouchard has served as program leader for four consensus conferences and symposia pertaining to various aspects of physical activity and health. He has published more than 1,000 scientific papers and has edited several books and monographs dealing with physical activity and health. Dr. Bouchard is the recipient of the Willendorf Award from the International Association for the Study of Obesity, the Sandoz Award from the Canadian Atherosclerosis Society, the Albert Creff Award of the National Academy of Medicine of France, and four honoris causa doctorates (Katholieke Universiteit Leuven, University of South Carolina, University of Guelph, and Brock University). He is a foreign member of the Royal Academy of Medicine of Belgium and a member of the Order of Canada. Dr. Bouchard is former president of the Canadian Society for Applied Physiology, the North American Association for the Study of Obesity, and the International Association for the Study of Obesity. He is a fellow of the American College of Sports Medicine, the American Heart Association, the American Society of Nutrition, and the American Association for the Advancement of Science. Steven N. Blair, PED, is a professor at the Arnold School of Public Health at the University of South Carolina in Columbia. His research focuses on the associations between lifestyle and health, with a specific emphasis on exercise, physical fitness, body composition, and chronic disease. As one of the most highly cited exercise scientists currently active in research, Dr. Blair has published more than 550 articles, chapters, and books in scientific and professional literature. He also was the senior scientific editor for the U.S. Surgeon General's Report on Physical Activity and Health. Dr. Blair has received numerous awards, including the Honor Award from the American College of Sports Medicine, Population Science Award from the American Heart Association, U.S. Surgeon General's Medallion, Folksam Epidemiology Prize from the Karolinska Institute of Stockholm, and a MERIT award from the National Institutes of Health. He also has received honorary doctoral degrees from universities in the United States, Belgium, and England. Dr. Blair is a fellow of the American College of Epidemiology, Society of Behavioral Medicine, American College of Sports Medicine, American Heart Association, and American Academy of Kinesiology and Physical Education. He was also electedd to membership in the American Epidemiological Society. He was the first president of the National Coalition for Promoting Physical Activity and is a past president of the American College of Sp