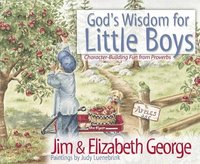 av Jim George, Elizabeth George, Judy Luenebrink
Inbunden Engelska, 2002-07-01
179
Köp
Spara som favorit
Finns även som
Visa alla 1 format & utgåvor
Thank You, dear God, for blessing me With food, a home, and a family. And now, O Lord, I ask if You might, Help me be honest and do what is right. Following the success of the bestselling God's Wisdom for Little Girls, now the wonderful teachings of Proverbs come to life for young boys, age 4-7, too! In God's Wisdom for Little Boys memorable rhymes by Jim and Elizabeth George play alongside watercolors by Judy Luenebrink for a charming presentation of truths to live by. With each turn of the page, parents and their children discover that God's little boy is prayerful thankful responsible kind brave truthful ...and so much more! Imparting God's wisdom to sons, grandsons, and any young boy today will help them become men of God tomorrow. This charming book is a gift that will make an eternal impression on every special boy in your life.
Visa hela texten

Elizabeth George, whose books have sold more than 12 million copies, is the author of A Woman After God's Own Heart (R) (more than 1 million copies sold) and Proverbs for a Woman's Day. She's also a popular speaker at Christian women's events. Elizabeth and her husband, Jim, are parents and grandparents, and have been active in ministry for more than 30 years. Award-winning California artist Judy Luenebrink has thrilled hundreds of thousands of readers with her illustrations and delightful art, including her work in Elizabeth George's bestselling children's book God's Wisdom for Little Girls. Her watercolors capture the hearts of children and parents alike. Judy and her husband, Don, have one son. Jim George and his wife, Elizabeth George, are Christian authors and speakers. Jim, author of A Husband After God's Own Heart (a Gold Medallion finalist) and The Bare Bones Bible (R) Handbook, has MDiv and ThM degrees from Talbot Theological Seminary. He has served in various pastoral roles for 25 years and on The Master's Seminary staff for ten years. Jim and Elizabeth have two married daughters and are grandparents.