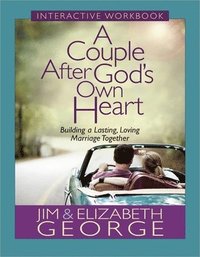 A Couple After God's Own Heart Interactive Workbook

Building a Lasting, Loving Marriage Together

av Jim George, Elizabeth George
Häftad Engelska, 2013-01-01
139
Köp
Spara som favorit
Finns även som
Visa alla 1 format & utgåvor
In A Couple After God's Own Heart Interactive Workbook, Jim and Elizabeth George build on the content of their book, A Couple After God's Own Heart, to create a companion guide that leads husbands and wives through a fascinating study on God's plan for marriage. Through a unique blend of Bible study material, questions for thought, and "What Can I Do Today?" applications, couples will grow a closer and deeper union as they... learn from the successes and failures of key couples in the Bible discover the essentials to a better marriage participate in discussions designed to stimulate communication with each other set and apply goals that help husbands and wives be all God designed them to be determine how to make the best of the strengths and weaknesses in their relationship This friendly and practical study offers life lessons from a variety of well-known couples in Scripture, and will equip spouses to experience more and more of the incredible bliss only God can bring into a marriage.
Visa hela texten

Jim George and his wife, Elizabeth George, are Christian authors and speakers. Jim, author of A Husband After God's Own Heart (a Gold Medallion finalist) and The Bare Bones Bible (R) Handbook, has MDiv and ThM degrees from Talbot Theological Seminary. He has served in various pastoral roles for 25 years and on The Master's Seminary staff for ten years. Jim and Elizabeth have two married daughters and are grandparents. Elizabeth George, whose books have sold more than 9 million copies, is the author of A Woman After God's Own Heart (R) (more than 1 million copies sold) and A Young Woman After God's Own Heart. She's also a popular speaker at Christian women's events. Elizabeth and her husband, Jim, are parents and grandparents, and have been active in ministry for more than 30 years.