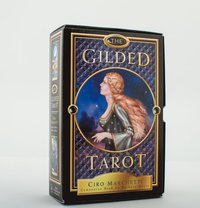 This kit also includes The Gilded Tarot Companion, a clear and insightful guidebook to the deck's structure and each card's significance.
Visa hela texten

2005 COVR Award Winner One of Aeclectic Tarot's Top Ten Decks of All Time "Each card in The Gilded Tarot is a small masterpiece...A gorgeous addition to any tarot enthusiast's collection."--New Age Retailer "The Gilded Tarot is one of those rare gems where the long-awaited reality is far better than I could have ever imagined. Every card is still as enchanting as that first glimpse, with details so rich they reveal something new every time...Whether you've been reading for years or have never touched a card, the Gilded Tarot set would make a wonderful addition to anyone's collection."--Tarot Reflections "It's love at first sight! Ciro Marchetti has graced his fantasy images with warm, luscious colors...The Gilded Tarot's archetypes are recognizable and accessible to anyone familiar with Rider-Waite style decks yet imaginative enought to offer fanciful new insights into standard Tarot arcana...Barbara Moore's book...combines simple clarity with style and wit." --DancingWorld "Llewellyn's Gilded Tarot is another treasure--when I take it with me for public readings, people gravitate to this deck like I gravitate to chocolate on a dessert tray. That's some serious gravitational pull. An added bonus--men, in particular, seem to really love working with this deck."--Tarot Passages Holiday Gift Guide

Ciro Marchetti (Florida) is an award-winning artist from the United Kingdom. He studied art in London, followed by a career working in Europe and South America before settling in the United States where he opened a design agency in Miami. In addition to managing his company, Ciro also gives workshops and lectures on digital imagery and illustration at the Fort Lauderdale Art Institute, and continues to create his own visionary art.In the early 1990s, at a party, someone put a tarot deck in Barbara's hands; she's held on tightly ever since. Tarot provides just enough structure so that we don't get lost as we explore the mysteries, plumb our dark corners, and locate our North Stars. Barbara has been reading and writing for as long as she can remember. She's published a number of books on tarot, including Tarot for Beginners, Tarot Spreads, The Steampunk Tarot, The Gilded Tarot, The Mystic Dreamer Tarot, and Tarot of the Hidden Realm. Writing is solitary work and is relieved by teaching tarot at conferences around the world. Barbara also loves working directly with clients, helping them uncover guidance and insight in the cards. Connect with Barbara online at www.tarotshaman.com.