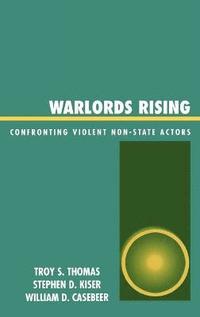 av Troy S Thomas, Stephen D Kiser, William D Casebeer
Inbunden Engelska, 2005-08-01
1219
Köp
Spara som favorit
Skickas inom 10-15 vardagar.
Fri frakt inom Sverige för privatpersoner.
Finns även som
Visa alla 2 format & utgåvor
Violent non-state actors (VNSA) often serve a destabilizing role in nearly every humanitarian and political crisis faced by the international community. As non-state armed groups gain greater access to resources and networks through global interconnectivity, they have come to dominate the terrain of illegal trade in drugs, guns, and humans. Warlords Rising arms those confronting the mounting challenge by delivering an innovative, interdisciplinary framework of analysis designed to improve understanding of non-state adversaries in order to affect their development and performance. Examining the utility of traditional theories of deterrence and warfighting in light of the insight gained through this interdisciplinary approach, the authors elevate the powerful role of environmental shaping in group development, recast deterrence in ecological terms, and lay out a strategy to defeat non-state adversaries if necessary. Whether the goal is preventing, coercing, or conquering, the framework of analysis presented here is designed to be universal, allowing for structured analysis across regions, types, and functions of non-state actors and providing the decision maker and policy maker witha variety of modes and methods of intervention.
Visa hela texten

Thomas, Kiser, and Casebeer fill an important void in terrorism literature. To date, much has been written about the root causes of terrorism. Less has been written about violent non-state actors who are today's main terrorist threat. And, until this book, nothing authoritative has been written about how, where, when, and why to intervene so that violent non-state actors can't perpetuate terrorist acts such as those of 9/11. Reading this book will give policy makers the necessary tools to preclude, mitigate, and possibly even prevent, future terrorist acts. A must-read for those charged with the security of the United States and its allies. -- Col. Russ Howard, director of the Combating Terrorism Center, U.S. Military Academy

Troy S. Thomas is an Air Force Officer with professional experience in intelligence operations and defense policy. He is a Term Member of the Council on Foreign Relations and a Member of the Council for Emerging National Security Affairs. Stephen D. Kiser is Director of Operations at the 614th Space Intelligence Squadron at Vandenberg Air Force Base and is a Term Memeber of the Council on Foreign Relations and the Pacific Council for International Programs. William D. Casebeer is a former associate professor at the U.S. Air Force Academy and is currently at the Naval Postgraduate School in Monterey, California.