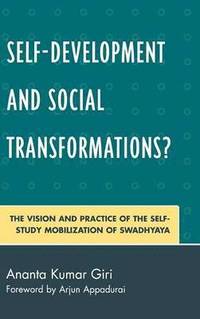 The Vision and Practice of the Self-Study Mobilization of Swadhyaya

av Ananta Kumar Giri
Inbunden Engelska, 2008-12-16
1399
Köp
Spara som favorit
Skickas inom 10-15 vardagar.
Fri frakt inom Sverige för privatpersoner.
Self-development of individuals and societies is an epochal challenge now but surprisingly very little has been written about this in the vast field of development studies and social sciences. The present book is one of the first efforts in this field and explores in detail the dynamics of pursuit of self-development and the accompanying contradictions in the self-study mobilization called Swadhyaya. Giri is one of the pioneers in bringing self-development to the core of theory and ethnographic multiverse of humanities and development studies. This outstanding book will be of interest to scholars in anthropology, sociology, development studies, humanities, and students of life all around the world.
Visa hela texten

Ananta Kumar Giri's fascinating work on Swadhyaya is one of the most detailed ethnographies I have read on the burgeoning indigenous movements to foster economic, social and ethical development in South Asia and other parts of the world. Swadhyaya espouses what Giri calls a 'practical spirituality' in which the ethnographer engages in simultaneous participation and in an 'integrally involving criticism.' This movement on the one hand combines a kind of neo-Vedic ideology that opens up a world not just for Hindus but also for Muslims, Buddhists and other religions. Giri discusses the movement in great detail, sympathetically but without sentimentality, and does not ignore the internal conflicts and leadership struggles that such a movement inevitably faces. I recommend this book for anyone interested in engaged ethnography and the new social movements that attempt to combine socio-economic welfare intrinsically tied to ethical concerns. -- Gananath Obeysekere, Princeton University Professor Giri's book provides an important and very interesting analysis of one of the most interesting cases of modern social movements and gives very important indications about the wide range of such movements in the inter-civilizational comparative framework. -- S N. Eisenstadt, Hebrew University Jerusalem With Self-Development and Social Transformations? Ananta Kumar Giri adds yet another fascinating book to an already impressive range of publications. It is at one and the same time a careful and detailed study of the Indian Swadhyaya movement and an illuminating analysis of the trajectory followed by a social imaginary as it becomes transposed from the local to the transnational level. At the core of the book, however, is that most interesting and urgent of concerns in contemporary social movement studies, namely the problem of subject formation. -- Piet Strydom, University College Cork, Ireland The book will prove a useful resource on graduate-level courses on Hindu and other Asian religious movements. * Religious Studies Review, June 2010 * At a time when individuals and societies are addicted to the pursuit of narrow self-interest, here comes a welcome reminder of an alternative path: the path of ethical and spiritual self-cultivation in the service of others. We are greatly indebted to Ananta Kumar Giri for his detailed study of this uplifting social movement or network called Swadhyaya. As he shows, Swadhyaya is a necessary complement to, and even has priority over, projects focused on purely economic or technical advancement. Widely renowned for his string of earlier publications, Giri with this book emerges as a major voice in the contemporary global civic discourse. -- Fred Dallmayr, University of Notre Dame

Ananta Kumar Giri is on the faculty of the Madras Institute of Development Studies, Chennai, India.