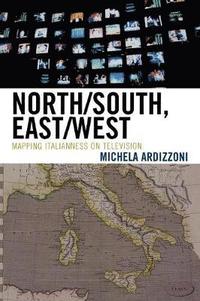 Ardizzoni has given us a theoretically sophisticated and extraordinarily well-researched study of contemporary Italian television that seeks to understand the meaning of national identity in Europe in the face of the cultural transformations wrought by immigration and globalization. From its close analysis of the broadcast industry to its comprehension of the intricacies of Italian culture, this book's insights should earn it a significant place in scholarly and public debates about the status of the nation and its peoples in an era of media globalization. -- Barbara Klinger, Indiana University Since the 1980s, Italian television has provided the most significant case example of media globalization in Europe and yet little has been written on the subject until now.North/South, East/West offers a comprehensive and incisive analysis of television's role in Italian society during a period of intensifying globalization. Ardizzoni masterfully demonstrates how the ongoing struggle over national identity has played out against profound regional, ethnic, and gender differences. -- Michael Curtin, Mellichamp Professor, University of California, Santa Barbara; author of Playing to the World's Biggest Audience

Michela Ardizzoni is visiting assistant professor at the University of Louisville in the departments of communication and women's and gender studies.