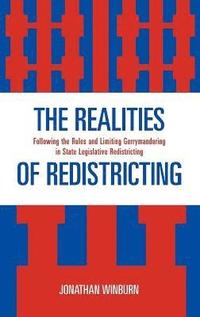 The Realities of Redistricting

Following the Rules and Limiting Gerrymandering in State Legislative Redistricting

av Jonathan Winburn
Inbunden Engelska, 2008-03-01
1249
Köp
Spara som favorit
Skickas inom 10-15 vardagar.
Fri frakt inom Sverige för privatpersoner.
Finns även som
Visa alla 2 format & utgåvor
Allowing legislators to pick the voters that make up their districts is a fundamental conflict of interest and central concern for the popular sovereignty of American elections. In The Realities of Redistricting, Jonathan Winburn examines the extent of this potential problem by focusing on both the incentives and the constraints facing state legislators during the redistricting process. Most research on redistricting tends to examine only the outcomes produced in terms of partisan gains or losses; however, we know much less about what constrains political mapmakers during the process. We know even less about whether constraints built into the process are enough to limit the partisan manipulation of both district boundaries and electoral outcomes. From the beginning stages of redistricting to the resulting outcomes on election day, this book analyzes the constraints and incentives that state legislators face. By examining the entire process, this book investigates who holds the power in the process and improves our understanding of the conditions under which redrawing district boundaries have a significant influence on partisan politics throughout the country. Specifically, reformers, who generally argue for commissions, may find that focusing on the rules rather than the actors is a better path to improving the process. The Realities of Redistricting is an interesting and informative read for anyone concerned with one of the most contentious processes in the American system.
Visa hela texten

This book fills a substantial hole in the redistricting literature. First, Winburn analyzes state legislative redistricting, an understudied arena. Second, not only do we find a detailed account of redistricting-across a variety of states with different rules, political contexts, and partisan objectives-but we are exposed to perhaps the most political process from beginning to end, starting with intentions and concluding with electoral consequences. It is an often stated refrain that rules matter and this work demonstrates convincingly that state-imposed constraints generally limit the excesses of those who would manipulate maps for partisan gain. -- Seth C. McKee, University of South Florida at St. Petersburg Jonathan Winburn has crafted an accessible and important book about a complex and controversial topic-redistricting as it is practiced in the United States. The Realities of Redistricting convincingly uses well-crafted case studies and sophisticated analysis to illuminate the lessons of the most-recent remap. Winburn directs us to important questions about the legal and political environment that governs redistricting, and discusses the prospects and consequences for reform of a system that has become needlessly reliant on the judiciary to fix its failings. -- Ronald K. Gaddie, professor of political science, University of Oklahoma

Jonathan Winburn is assistant professor of political science at the University of Mississippi.