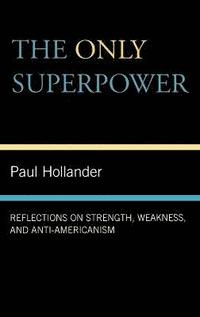 The Only Super Power

Reflections on Strength, Weakness, and Anti-Americanism

av Paul Hollander
Inbunden Engelska, 2008-12-16
569
Köp
Spara som favorit
Finns även som
Visa alla 1 format & utgåvor
In The Only Superpower: Reflections on Strength, Weakness, and Anti-Americanism, Paul Hollander examines anti-Americanism (including the relationship between the foreign and domestic varieties), American culture (especially mass culture), the lingering political and cultural influences of the 1960s, and the controversial relationship between the realms of the personal and the political. He also revisits the part played by hatred, and especially the scapegoating impulse, in social and political conflicts. The essays range widely, from Michael Moore's political celebrity, the American love for SUVs, and getting old in America to Islamic fanaticism and the aftermath of the fall of Eastern European communist systems.
Visa hela texten

Hollander is one of the few critics who seriously address how celebrity culture has deeply altered the role and function of intellectuals. He reexamines his ideas about America's adversary culture, born of the 1960s, and provides ample illustrations of its continued vitality in new forms and voices. -- Jonathan Imber, Wellesley College In this fine collection of essays Paul Hollander continues his lifework of documenting the misperceptions and misrepresenations of ideologues and those under their influence. He shows time and again how peddlers of anti-Americanism are bent on undermining the political system whose advantages they enjoy and abuse. By juxtaposing their claims and plain facts he exposes their indifference to truth and reason. -- John Kekes, author of The Art of Politics The distinguished Hungarian-born sociologist Paul Hollander has a uniquely Central European perspective on the foibles of American life and especially its intellectual milieu. These fast-paced essays are smart, provocative, and sometimes amusing snapshots of our wonderfully imperfect universe. -- Norman Naimark, Stanford University Paul Hollander, one of our most distinguished political sociologists, has written a wide-ranging, personal, and trenchant set of essays about America and its adversaries, at home and abroad. With reflections on his own fascinating journey from Hungary to America, Hollander provides unique and thought-provoking perspectives. -- Norman J. Ornstein, American Enterprise Institute I have been reading Paul Hollander for many years-often agreeing with him, sometimes disagreeing, and always profiting from his knowledge and acuity. -- Paul Berman, author of Terror and Liberalism and Power and the Idealists In this beautifully written, understated, and powerful collection Paul Hollander brings his acute powers of observation and analysis to bear on a variety of important themes in American culture and society including the discontents of modernity, the cult of celebrities, the pervasive entertainment orientation of mass culture and the responses to global anti-Americanism and the manifestations of Islamic fanaticism. His observations illuminate recent trends and contain wise and sobering insights for the present and future of our country. -- Jeffrey Herf, University of Maryland, College Park He writes with force, clarity, and even elegance.... He is capable of taking a comparatively small phenomenon and extracting the deeper significance from it.... Paul Hollander's work is an example of the dialectic between lived experience and abstract reflection, of which all work in the humanities should-but alas, seldom does-partake. -- Theodore Dalrymple, author of Our Culture, What's Left of It * City Journal * Paul Hollander's latest book is an understated, wry, and often hilarious collection of reflections on the profound link between anti-Americanism and the delusions and desires stirred up by modernity. Hollander's book is rich in fact and vivid, direct observation; a sociologist by profession, he practices something close to the nineteenth-century Tocquevillean variety of the discipline and eschews the abstruse theory, do-gooding mawkishness, and quantitative pedantry that plague his field and academe at large. The Only Superpower contains many delights of this cringe-inducing variety; Hollander is a master at unveiling lame vanity, the psychologically dirty and suspect. . . . Hollander's book is an important reminder in a time when not just the intellectual but the ordinary American seems to cleave ever more dangerously to a presumptous desire for change and progress, which (so it is hoped) will obscure the fundamental limitations and shortcomings of life itself. * The New Criterion *

Paul Hollander is Professor Emeritus of Sociology at the University of Massachusetts at Amherst and a center associate of the Davis Center for Russian and Eurasian Studies at Harvard University.

Part 1 Introduction: The Pleasures of Hate and the New Anti-Americanism Part 2 Part I: The New Anti-Americanism Chapter 3 1. Anti-Americanism and a World-Class Hate Crime Chapter 4 2. Anti-Americanism: Murderous and Rhetorical Chapter 5 3. The Politics of Envy Chapter 6 4. Anti-Americanism and Moral Equivalence Part 7 Part II: Americana Chapter 8 5. Our Society and Its Celebrities Chapter 9 6. Watching Celebrities Chapter 10 7. Michael Moore: New Political Celebrity Chapter 11 8. The Chronic Ailments of Television News Chapter 12 9. Why Americans Like SUVs Chapter 13 10. Stereotyping and the Decline of Common Sense Chapter 14 11. An Islamic Requirement on Campus Chapter 15 12. History Repeats Itself: Tawana Brawley and the "Exotic Dancer" at Duke Chapter 16 13. Rehabilitating the Great Books: Literature and Life Chapter 17 14. The Counterculture of the Heart Chapter 18 15. Old and Busier Than Ever Chapter 19 16. American Travelers to the Soviet Union Part 20 Part III: Foreign Matters Chapter 21 17. Alexander Yakovlev Chapter 22 18. Violence of Higher Purpose Chapter 23 19. The North Korean Gulag Chapter 24 20. Admiring North Korea Chapter 25 21. The Fiftieth Anniversary of the Hungarian Revolution Chapter 26 22. Crossing the Moral Threshold and the Rejection of Communist Systems in Eastern Europe Chapter 27 23. Ambivalent in Amsterdam Chapter 28 24. Travel in the Peloponnesos Part 29 Part IV: The Survival and Replenishment of the Adversary Culture Chapter 30 25. The Resilience of the Adversary Culture Chapter 31 26. The Chomsky Phenomenon Chapter 32 27. The Banality of Evil and the Political Culture of Hatred Chapter 33 28. The Left and the Palestinians Chapter 34 29. The Personal and the Political in Lessing's Fiction Chapter 35 30. Haven in Cuba Chapter 36 31. Demystifying Marxism Chapter 37 32. Public Intellectuals and the God that Failed Part 38 Part V: In Conclusion Chapter 39 33. From a "Builder of Socialism" to "Free-Floating Intellectual": My Politically Incorrect Career in Sociology