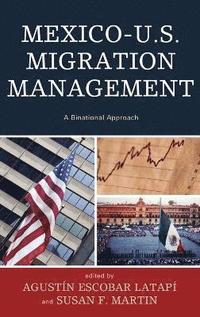 av Augustin Escobar Latapi, Susan F Martin
Inbunden Engelska, 2008-10-23
909
Köp
Spara som favorit
Finns även som
Visa alla 2 format & utgåvor
The need to understand the migration between the United States and Mexico is greater today than at any time in its century long history. Its volume and complexity are greater than most observers might have imagined even a decade ago; and it operates in a context charged with serious human, political, and security challenges. Yet, there is often confusion over the most fundamental questions about the demography, economics, and political nature of the movement and its policy responses. The editors of this book bring together a team of top policy-oriented migration experts from Mexico and the United States to provide an up-to-date analysis leading to grounded policy recommendations for both governments. Their conclusions derive from new analyses as well as from detailed discussions with policy-makers. Contributors assess the main characteristics, trends, and factors influencing Mexico-U.S. migration and recommend actions that should improve migration management, substantially reduce undocumented flows, and refocus Mexican migration into legal channels. Also contained within this book are recommendations of development strategies in Mexico that should reduce mid- to long-term emigration pressures. The book shows that collaboration between the U.S. and Mexico is not only possible, but necessary, as unilateral reforms will continue to fail until both governments act together to regulate the flow, improve conditions for the migrants, and make sure that migration has positive social and economic impacts on both countries.
Visa hela texten

Agustin Escobar Latapi and Susan F. Martin have performed an exceptional public service to both Mexico and the United States. The scholars they have gathered offer valuable suggestions for policy reforms in both countries that build on the reality of a unified labor market that neither government has dealt with effectively. Taken as a whole, the analyses and the recommendations are very useful and sober additions to the highly emotional and intellectually weak current discussion of the issues in both countries. -- Jeffrey Davidow, former U.S. ambassador to Mexico This is a timely and important volume that provides a balanced and well-documented account of US-Mexican migration by leading specialists from both Mexico and the United States. It is particularly strong in its demographic, economic, and policy analyses, providing a state-of-the-art account, not only of the current situation, but also of likely future trends. In a field in which debate and analysis is too often clouded by partisanship, both within and between the two countries, this volume is outstanding for its binational collaboration and dispassionate analysis. It provides new thinking about migration policy at a time when this is badly needed in both Mexico and the US. -- Bryan R. Roberts, University of Texas at Austin Mexico-U.S. Migration Management: A Binational Approach is as significant a contribution as its topic is important for both the United States and Mexico! This is the best comprehensive policy-relevant treatment of the subject in over a decade and its information and recommendations should be absorbed by all who care about both countries' futures. A 'must read!' -- Frank Bean, director of the Center for Research on Immigration, Population and Public Policy, University of California-Irvine Immigration has always made a major contribution to the social and economic makeup of the United States. Arrival of immigrants often takes place below the radar screen of public attention, but at other times their arrival generates great controversy, as is now the case of unauthorized immigrants from Mexico. The mexicanos and norteamericanos who wrote the chapters of this book provide both context and analysis for understanding the different reactions in the two countries. This is a must read for anyone who wishes to be informed about this issue. -- Sidney Weintraub, Center for Strategic and International Studies

Agustin Escobar Latapi is professor at CIESAS Occidente (Center for Higher Research in Social Anthropology) in Guadalajara, Mexico. Susan F. Martin is Director of the Institute of the Study of International Migration (ISIM) at Georgetown University.