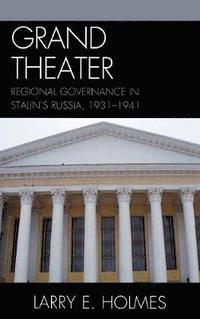 av Larry E Holmes
Inbunden Engelska, 2009-08-16
919
Köp
Spara som favorit
Finns även som
Visa alla 1 format & utgåvor
Grand Theater examines bureaucracy not as a readily identifiable structure but rather as a process of day-to-day operation. Thus it is concerned with how agencies of both the communist party and the state apparatus not only implemented directives from above but also responded to perceived successes and failures, chose to produce, share, and conceal information, and reacted when common citizens injected themselves into governance by making demands and complaints. It concentrates on the 1930s as a seminal period when Stalin's regime established a hypercentralized system that dominated the Soviet Union until its collapse and the Russian Federation since then. It also focuses on the administration of schools as the primary window through which to examine governance because of the importance of education to Soviet authorities, most notably Stalin himself, and the accessibility of archival documents in this field, one not classified as particularly sensitive. Grand Theater provides novel insights into the functioning of Stalinist bureaucracy, brings to the forefront a new understanding of center-periphery relations, and reveals the important role of individuals in what has heretofore been largely regarded, when beyond the Kremlin's inner circle, as a highly impersonal system. It also examines in unprecedented ways the reciprocal relationship between ideology and policy formation, on the one hand, and actual administrative practices, on the other, a relationship that more often than not had negative and dysfunctional consequences for both the governed and governing. Holmes argues that the Soviet administrative system during the 1930s was much like grand theater. The documents produced for and by that system were the script for a discursive theatrical reality that inspired neither a careful appraisal of problems nor a dispassionate search for workable solutions.
Visa hela texten

The grand theater to which the title refers rests upon the 'scripts' assembled by Holmes from letters, meeting transcripts, administrative reports, legal records, personnel dossiers, and similar materials that he painstakingly analyzed in the archives of the Kirov region. The book's narrative thus mainly consists of detailed discourses among teachers, civil bureaucrats, and party officials that the author interprets as the scripts of his theater. Nearly every chapter also benefits from a carefully assembled conclusion that advances the main arguments of the book....this book is worthy of the attention of specialists. -- . * American Historical Review, April 2010 * This is an important book for anyone interested in schools, educational policy, microhistory, and Stalinism of the 1930s. Holmes's book does what the best local studies should do: while providing a personal and penetrating look at real people on the ground, it also makes important larger interpretive points and suggests new frameworks for bigger pictures. * The Russian Review * The book claims a wider relevance for this approach to the study of the Stalinist system at the province level. * Slavic Review * Holmes's book is full of insights into how the Stalinist system really operated, exploring the complete mismatch between what was supposed to happen and what could actually happend.....In giving due consideration to those forgotten years, 1940-1941, Holmes has perhaps opened up the next phase of research for those wishing to make sense of Stalin's Russia. * Europe-Asia Studies * Larry Holmes is rightly recognized as one of the leading historians on the Soviet education system in the 1920s and 1930s. His latest monograph, Grand Theater, will only reinforce this status. Working on a tip from a Russian education scholar, Holmes departed the more familiar Moscow archives for the city of Kirov, in the Volga-Vyatka region, where a treasure trove of material on the regional administration of education in the 1930s supposedly awaited discovery. The tip paid off, and the result is a terrific book that takes the reader into the day-to-day tasks, worries, and affairs (business and otherwise) of the Kirov district's education establishment. * Journal of Modern History * Holmes produces a detailed, nuanced, and largely persuasive picture of the operations of power in a Soviet province under the highly centralized, yet often chaotic, Stalinist system. ... This book is to be highly commended for its subtle analysis of Soviet governance in action at regional and local levels and of how power was experienced, rehearsed, and reproduced by social actors in everyday life on the periphery. The author's prose is simple, direct, lucid, and jargon-free. This is a lively and intellectually stimulating work, which will be of greatest interest to all scholars and students of Stalinist Russia and of modern European history. * Canadian Slavonic Papers * Larry Holmes, our leading expert on Soviet schools, has turned his attention from Moscow to the provinces. In this lively and well-researched book, he focuses not on grand theories of bureaucracy but rather on daily practice. The result is a lively and fascinating close-to-the-ground account in which we meet real people as they live their lives and perform their roles in Soviet schools. -- J. Arch Getty, University of California, Los Angeles

Larry E. Holmes is professor emeritus of history at the University of South Alabama.