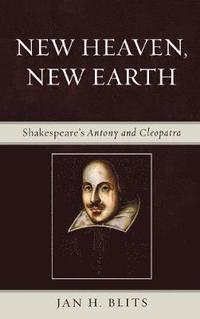 av Jan H Blits
Inbunden Engelska, 2009-06-16
919
Köp
Spara som favorit
Finns även som
Visa alla 2 format & utgåvor
Patterned after his previous books on Shakespeare's plays, Jan H. Blits's New Heaven, New Earth is a scene-by-scene, line-by-line philosophical study of Antony and Cleopatra. Combining close attention to detail with interpretive breadth, Blits approaches Shakespeare as a first-rank thinker who, master of his own thought and writing, produced plays and poetry with an infinitely conscious art, like any commonly recognized philosophical poet. Treating the play as a fully coherent whole, Blits shows that Antony and Cleopatra, as much a history play as a love story, depicts the transition from the pagan to the Christian world-from the aftermath of the collapse of the Roman Republic and the decline of the pagan gods to the emergence of the Roman Empire and the conditions giving rise to Christianity. Instead of being organized thematically, New Heaven, New Earth follows the play from beginning to end, closely examining Shakespeare's text on its own terms and not on the terms of modern literary theory. Using this approach, Blits draws significant and insightful conclusions that will satisfy the interests of scholars of politics, literature, and history alike.
Visa hela texten

Unlike the typical commentator, Blits brings to bear on his reading of each line the relevance of every other line prior to or subsequent to the passage he examines. In this his sixth book on Shakespeare, Blits proves for the sixth time his maverick wisdom of keying critical findings to the dramatic sequence line by line. Rather than sifting for evidence on behalf of prefabricated theses, Blits allows Shakespeare's meanings to foliate as the dramatist intended they should. He has provided an additional attraction by making readers aware of the pertinence of numerous Greek and Roman authors ranging much beyond the play's acknowledged source in Plutarch. -- John Alvis, professor and director, American Studies Program, University of Dallas I had regarded myself as quite familiar with Shakespeare's Antony and Cleopatra, a play of which I am inordinately fond, but reading Jan Blits's careful explication de texte showed me how much I had been missing. The work is a masterful reading of Shakespeare's great play, practically line by line, bringing out the richness of the poet's language and thought.... Blits's careful line-by-line interpretation of the play demonstrates how Shakespeare brings to life this transformation of political and religious life. All of its aspects, from the most political to the most personal, are carefully examined and illustrated. The reader gains an enriched understanding of the remarkable tableau Shakespeare has painted of this crucial period in the history of the West. * Interpretation * The format is familiar to readers of earlier books by Jan Blits: scene-by-scene analysis informed by a comprehensive argument that arises from the close commentary. Here he continues his fine work on Shakespeare's Rome, always attentive to the pagan world in which it originated and the Christian world that emerged from it. This is a vivid and thoughtful reading of the politics and passions of Shakespeare's great Roman tragedy. -- Mera Flaumenhaft, St. John's College

Jan H. Blits is professor of political science and international relations at the University of Delaware and author of Spirit, Soul, and City: Shakespeare's Coriolanus, The Soul of Athens: Shakespeare's A Midsummer Night's Dream, Deadly Thought: Hamlet and the Human Soul, The Insufficiency of Virtue: Macbeth and the Natural Order, The End of the Ancient Republic: Essays on Julius Caesar, and The American University: Problems, Prospects, and Trends.