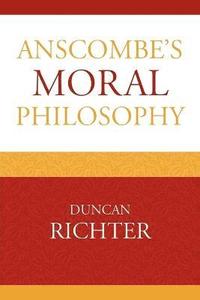 av Duncan Richter
Häftad Engelska, 2010-11-29
519
Köp
Spara som favorit
Skickas inom 10-15 vardagar.
Fri frakt inom Sverige för privatpersoner.
Finns även som
Visa alla 2 format & utgåvor
G.E.M. Anscombe (1919-2001) was one of the most important, outspoken, and misunderstood philosophers of the twentieth century. More than anyone else she revived virtue ethics and the philosophy of action. She was also almost alone in publicly opposing Oxford University's decision to award an honorary degree to President Truman. She regarded his decision to authorize bombing Hiroshima and Nagasaki as murderous. Some liberals admire her for this stand, but conservatives also admire her for her opposition to abortion, contraception, and same-sex marriage. Clearly her values were not those of her times. This led her to reflect on the differences, producing such works as Modern Moral Philosophy, in which she rejected all modern theories of ethics. In this paper she coins the term 'consequentialism' to describe the dominant view, which she rejects, that what matters morally is the results of what one does. Put crudely, the ends can justify the means. If enough lives can be saved by targeting civilians, then civilians should be targeted. Against this, Anscombe insisted that certain actions are forbidden, which prompted her interest in the nature of action and its relation to a person's character. Whether one agrees with her or not, these are all issues that continue to be relevant and on which Anscombe's views are always strong and intelligently defended. Her presentation of these views, unfortunately, is often dense, and they are often badly misunderstood even by some very able minds. Anscombe's Moral Philosophy clarifies what Anscombe thought about ethics, showing how her different ideas connect and how she supported them. It also evaluates her reasoning, showing that it is stronger in some parts than in others. The five main chapters of the book deal in turn with her work on military ethics (including the so-called doctrine of double effect), her rejection of consequentialism, her attack on the modern, atheist notion of moral obligation, her analysis of intention and its relevance for ethics, and her controversial ideas about sex.
Visa hela texten

A splendid book on a remarkable thinker, whose writings on ethics are deeply controversial. Richter makes clear the power and enduring interest of Anscombe's ideas. His reading is distinguished by sympathetic insight and sharp critical intelligence, making the book essential reading for anyone interested in ethics. -- Cora Diamond, University of Virginia Richter provides a helpful guide to the moral philosophy of G.E.M. Anscombe, a leading 20th-century philosopher. His exposition of Anscombe's moral viewpoint develops through a thoughtful, accessible attempt to clarify and defend it against many leading critics. Throughout, Richter's development of Anscombe's views are sympathetic without being insensitive to Anscombe's often-shallow treatment of the history of philosophy. Accordingly, Richter succeeds in bringing out the manner in which Anscombe's though is important-not for its penetrating insight into the history of ideas, but for its novel contribution to that history. Chapters are generally organized around the development of concepts; e.g. chapter 1, "War," focuses primarily on the articulation and defense of the doctrine of double effect. Here Richter is less concerned with defending Anscombe's views on war's morality than with clarifying the doctrine and situating it in Anscombe's philosophy. Similarly, chapter 3, "Obligation," is concerned less with the concept and more with the manner in which a conception of the intelligibility of concepts informed Anscombe's views. Ultimately, this volume is not only an importnat supplement to the Anscombe literature, but also one that, in the process of clarifying the philosopher's views, makes an important contribution to contemporary moral philosophy. * CHOICE *

Duncan Richter is professor of philosophy at Virginia Military Institute and author of The A to Z of Wittgenstein's Philosophy, Why Be Good? A Historical Introduction to Ethics, Wittgenstein at His Word, and Ethics after Anscombe: Post 'Modern Moral Philosophy'.