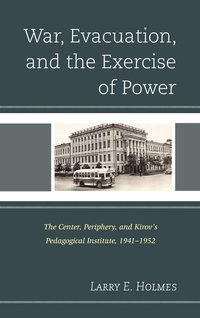 War, Evacuation, and the Exercise of Power

av Larry E Holmes
Inbunden Engelska, 2012-05-31
879
Köp
Spara som favorit
Finns även som
Visa alla 1 format & utgåvor
War, Evacuation, and the Exercise of Power examines the history of the Pedagogical Institute, located in the USSR's Kirov region from 1941 to 1952. Holmes reveals a tangled and complex relationship of local, regional, and national agencies. While it recognizes the immense strength of the center, it emphasizes a contentious diffusion, although not a confusion, of authority. In so doing, it departs from traditional models of Soviet power with their neatly drawn vertical and horizontal lines of command. It also demonstrates institutional and personal behavior simultaneously consistent with and at odds with a triumphalist wartime narrative. The Nazi invasion of Soviet-held territory in 1941 set off a massive evacuation eastward that included the relocation in Kirov of the Commissariat of Forest Industry and a large factory under the jurisdiction of the Commissariat of Aviation Industry. By occupying the two main buildings of Kirov's Pedagogical Institute, these commissariats forced the Institute to abandon the provincial capital for a remote rural location, Iaransk. Then and for years thereafter, the Pedagogical Institute portrayed itself as the victim of these commissariats' bad behavior that included the physical destruction of the Institute's buildings and much of its property. In its quest for justice, as it understood it, the Institute had the support of the Commissariat of Education. But that agency was far too weak in comparison with its institutional competitors, the offending commissariats, to provide much help. Of greater significance, the Institute forged a remarkable alliance with governing party and state organs in the city and region of Kirov. A united Kirov compelled the entry into the dispute of the Council of Peoples Commissars of both the Russian Republic and Soviet Union and the party's Central Committee. In addition to a focus on the exercise of power at the center and periphery, this study also assesses the Institute's wartime exile in Iaransk. The difficulties of life there led to a Soviet version of town vs. gown and provoked the Institute's further resentment of Moscow. They also exacerbated conflict among distinct groups at the Institute as each advanced its own interests and authority. Faculty and administration, ranked and unranked faculty, communists and non-communists, and evacuated instructors and the Institute's own all fought amongst themselves over the relationship of politics and scholarship and over the legitimacy of a highly stratified system of food rationing.
Visa hela texten

By focusing on the war years, when the institute evacuated to the isolated provincial town Iaransk, Holmes adds to the developing scholarship about the politics and planning of evacuation and return, and he continues to show how local studies can illuminate national issues. ... Holmes's broad and thorough examination of nine national and local archives, newspapers, memoirs, and personal interviews has led to an exhaustive account of the institute's war years. The institute serves as the medium for examining the exercise of power during the war both within the institute and among various party, government, and industry organs at the local, regional, and national level. ... Holmes convincingly shows a political process that was nearly always based on self interest, both institutional and, at times, personal. Scholars and graduate students interested in local power politics should add Larry Holmes's new book to their reading lists. * The Russian Review * Larry E. Holmes skillfully portrays the evacuation and enforced exile. ... Holmes paints magnificent accounts of great friendships and love that bonded institute faculty and students together. ... Holmes details an intertwined and complex relationship between local, regional, and national agencies of the Soviet Union. The book shatters outdated models of Soviet power that supposedly was based on lines of command, and shows the Soviet state and society in all its complexity. Furthermore, the book demonstrates that institutional and personal behavior was both consistent and at odds with a triumphant wartime narrative. The book, based on thorough research, is outstanding and makes an invaluable contribution to Soviet history. * Canadian Slavonic Papers * This book is a continuation of Larry E. Holmes's remarkable efforts to use the history of Soviet education to provide new insights into the internal workings of Stalinism. . . . Holmes's latest book provides a new paradigm for researching the relationship between individuals and the Soviet system in the 1940s. ... War, Evacuation, and the Exercise of Power makes an important contribution to scholarship on Stalinism and the home front during World War II. Historians interested in the experience of the Soviet people will need to engage with Holmes's thoughtful arguments about the ways that individuals negotiated, challenged, and became victims of diffuse and tangled webs of power. * Slavic Review * Meticulously researched. . . . this book gives us a grassroots view of the wartime struggle to survive that defined the late Stalin years. * American Historical Review * Continuing a long-held association (even fascination) wit h the town of Kirov (now Vyatka), Larry Holmes's new book is an interesting . . . study. . . .This book offers an interesting, in-depth narration of an institution, providing great texture and numerous telling anecdotes, but the significance of all this remains up to the reader to consider and interpret. * Europe-Asia Studies * In Larry E. Holmes's hands, the history of this institution turns into a microversion of events at the global level - a country in chaos and confusion, reeling after an invasion by the seemingly invincible German army. While keeping in sight the events at the global level, he also does an unparalleled job of narrating a very complex local history. In his analysis, Holmes not only undercuts the prevailing 'triumphalist' narrative still found in Russian accounts, but also graphically describes the chaotic and internecine warfare taking place horizontally among local institutions for scare manpower and physical resources such as space, fuel, even furniture and lighting. As Holmes points out, it was a dog-eat-dog world, in which suspicion, jealousy, and duplicity dominated, and what were essentially the deficiencies of a system mutated into bitter and consequential personal feuds. Indeed, one of the achievements of this book is to make the reader almost empathize with people whose behavior was bru

Larry E. Holmes is professor emeritus of history at the University of South Alabama.