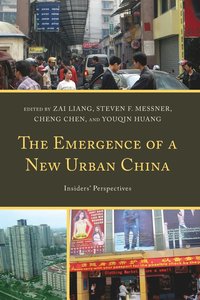 The Emergence of a New Urban China

av Zai Liang, Steven F Messner, Cheng Chen, Youqin Huang
Häftad Engelska, 2013-10-18
519
Köp
Spara som favorit
Skickas inom 10-15 vardagar.
Fri frakt inom Sverige för privatpersoner.
Finns även som
Visa alla 2 format & utgåvor
This book provides first-hand, insiders' perspectives on urban issues in China, aiming to provide a theoretically informed and empirically rich discussion of the new social landscape of urban China in the 21st century. The research reported encompasses both quantitative and qualitative methodologies, with the latter based on extensive and in-depth fieldwork. The authors, most of them being native Chinese, had distinctive advantages in gaining access to study subjects, and had intimate knowledge of the locations and people they studied. The book's primary geographical focus is on southern China, especially Guangdong province. This region is in the forefront of China's transition to a market economy, and therefore constitutes an ideal social laboratory to study the key urban issues that have emerged in the last two decades. Combining ethnographic research along with survey-based quantitative analysis, this volume will appeal to students of urban issues in contemporary China, and it will generate important and fresh empirical and theoretical insights for the broader scholarly communities of area studies, urban studies, and urban sociology. It will also serve as a useful text for graduate courses and advanced undergraduate courses on China and urban sociology.
Visa hela texten

Nine essays in this unique volume-each essay a joint endeavor of a doctoral student inside China and a senior scholar in North America-not only update a variety of key urban issues, but also showcase the scholarship and positions of a generation of young Chinese sociologists who are living through the complicated postsocialist, urban transformation. Social surveys and interviews, most of which were conducted by these young scholars in Guangdong province from 2005 to 2010, make the essays rich in both quantitative dimensions and graphic details of human agency. Causes, consequences, and discursive strategies of the contest and negotiation between old and new urban dwellers over cultural identity, legal status, and economic entitlement are exceptionally well-captured and probed in many of the essays. The contributors impartially treat various interest groups, such as native urban residents, migrant workers, ethnic minorities, laid-off workers, and African merchants. An accessible guide for urban issues in China, this book would be good complementary material for advanced undergraduate or graduate seminars. And everybody interested in contemporary China will find it illuminating. Summing Up: Highly recommended. * CHOICE * This collaboration between Albany and Guangzhou, and between senior scholars and a new generation of researchers, takes the reader directly into the realities of a new urban China. This is a world where people make strategic choices about their future, navigate a rapidly changing labor and housing market, and use high-tech tools in traditional villages. The studies in this volume were originated by doctoral students who are living this new China, and they have a freshness and originality that one rarely sees in academic work. -- John R. Logan, professor of sociology, Brown University With all essays that pair the grounded insights from young scholars inside China with the analytical experience of scholars in the United States, this edited book offers a refreshing collective probe into the new and complex reality of an urbanizing China, from its leading region of the Pearl River Delta to much beyond. -- Xiangming Chen, Trinity College This edited volume by Liang, Messner, Chen, and Huang represents a continuation of the project on 'the next generation of urban China scholars' that the Urban China Research Network based at the University at Albany initiated more than a decade ago. The nine chapters, each of which is original research jointly composed by a graduate student or junior faculty in China and a senior academic in North America, exemplifies the best of Sino-American and Sino-Canadian collaboration in unraveling the enigma of urban development in the world most populous and fastest growing country. Much effort has been made to deepen our understanding of topics that have drawn much of scholarly attention, such as peasant-migrants' employment status and citizenship rights, 'villages-in-the city,' and socio-spatial segregation arising from hukou segmentation, by introducing new perspectives in conjunction with meticulous empirical analysis. Thus, both local villagers-in-the-city and peasant-migrants are subjects of inquiry. While most scholars criticizes the discriminatory treatments against agricultural hukou holders, Li and Smart show that local villagers are trying hard to cling to their agricultural hukou status. Also, while most studies focus on the job barriers that peasant-migrants have to face, Li and Liang demonstrate that job mobility among migrants is in fact high, and that job transition is often accompanied by salary increase. In addition, there are also chapters that explore relatively unchartered territories. These include the one on African migrants in Guangzhou, who now number 100,000; the one on the Bai minority in Yunnan, who have been able to capitalize on their unique culture to promote tourism; and the chapter on the use of mobile phones by laid off workers in Shenyang, which has he

Bloggat om The Emergence of a New Urban China

About the Editors: Zai Liang is professor of sociology at the University at Albany, SUNY, and director of Urban China Research Network. He received his Ph.D. in sociology from the University of Chicago and conducted post-doctoral research at Brown University. He has served as chair of Asia and Asian American section of the American Sociological Association. His main research interests are in internal and international migration and urban sociology. His research has been funded by the National Science Foundation, the National Institutes of Health as well as other private foundations. Steven F. Messner is Distinguished Teaching Professor of sociology at the University at Albany, SUNY. He received his Ph. D. in Sociology from Princeton University. His research focuses on social institutions and crime, understanding spatial and temporal patterns of crime, and crime and social control in China. In addition to his articles in professional journals and chapters in edited volumes, he is co-author of Crime and the American Dream; Perspectives on Crime and Deviance; Criminology: An Introduction Using ExplorIt; and co-editor of Theoretical Integration in the Study of Deviance and Crime and Crime and Social Control in a Changing China. He served as the 2010-11 President of the American Society of Criminology. Cheng Chen is associate professor of political science at the University at Albany, SUNY. She received her Ph.D. in Political Science from the University of Pennsylvania in 2003. Her research and teaching interests include post-communist politics, nationalism and nation-building, democratization, Chinese politics, and comparative-historical methodology. She is the author of The Prospects for Liberal Nationalism in Post-Leninist States (University Park, PA: Penn State University Press, 2007) as well as many journal articles. Currently, she is working on a new book project examining the search for regime ideology in post-communist China and Russia. Youqin Huang is associate professor of geography and planning, and a research associate of the Center for Social and Demographic Analysis at the University at Albany, SUNY. She received her Ph.D. in Geography from the University of California, Los Angeles in 2001. She is interested primarily in the interaction between population behavior and geography. Her research has focused on housing, migration/mobility, urbanization and China. She has published in many of the leading journals in her fields of expertise. Contributors: Fuping Chen, Xiaojuan Chen, Eric Fong, Guangxu Ji, Cuiling Li, Jing Li, Zhen Li, Alan Smart, Josephine Smart, Jiashun Wang, Tao Xu, Xiongduan Yang