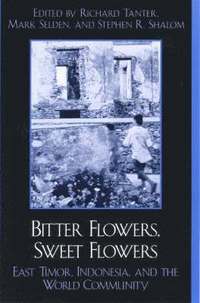 av Richard Tanter, Mark Selden, Stephen R Shalom
Inbunden Engelska, 2001-02-01
1699
Bevaka
Spara som favorit
Tillfälligt slut – klicka "Bevaka" för att få ett mejl så fort boken går att köpa igen.
Finns även som
Visa alla 2 format & utgåvor
East Timor is at last, and at terrible human cost, firmly on the road to independence. The significance of its passage to freedom-for its people, for Asia, and for the world-is manifold. This volume offers a comprehensive overview of East Timor's travail and its triumph in its international context. East Timor's independence constitutes one of the final and most poignant moments in a long and bitter history of European colonization and decolonization. For the people of East Timor, independence from Portugal in 1975 was only the beginning of a new struggle against Indonesian invaders-a struggle that took the lives of 200,000 East Timorese-and one that is by no means over. The case of East Timor, both during and after the Cold War, provides a litmus test for issues of international responsibility, posing questions of double standards in unusually clear-cut form. It reveals the active support by the United States and other powers for the military forces of Indonesia throughout the years of that nation's invasion and repression of East Timor, until 1998 when the collapse of the Indonesian dictatorship ushered in a new phase in the East Timorese struggle. Contributions by: Peter Bartu, Noam Chomsky, Richard Falk, Geoffrey C. Gunn, Peter Hayes, Wade Huntley, Gerry Van Klinken, Helene Van Klinken, Arnold S. Kohen, Allan Nairn, Sarah Niner, Constancio Pinto, Geoffrey Robinson, Joao Mariano Saldanha, Charles Scheiner, Mark Selden, Stephen R. Shalom, and Richard Tanter.
Visa hela texten

Bitter Flowers, Sweet Flowers is a fine book. Usefully divided into five sections ('East Timor: Resistance, Repression, and the Road to Independence;' 'Referendum and Independence;' 'East Timor, the United States, and the World Community;' 'East Timor and Indonesia;' and 'The Future of East Timor'), it contains chapters written by experts with long experience of Indonesia and East Timor. The carefully chosen black-and-white photographs by leading international photographers of East Timor such as Ross Bird and Steve Cox bring the suffering and reality of Indonesian-occupied East Timor vividly alive, as do the six poems by contemporary East Timorese writers. The three editors are to be congratulated for the care they have taken with their editorial task. The quality of the contributions is high, the index serviceable, and there are useful maps and glossaries of key Indonesian, Portuguese, and East Timorese terms and acronyms. This book will be read with profit by all those with a serious interest in East Timor and its post-independence future. -- Peter Carey * Asian Affairs * An excellent book. * Journal of Asian Studies * The overall effect of Bitter Fowers, Sweet Flowers is worthwhile and thought-provoking. This volume is to be highly recommended as a reader on East Timor. * Southeast Asian Studies * For anyone who would hope to understand the struggle of the people of East Timor over the past twenty-five years-or indeed, the past half century-Bitter Flowers, Sweet Flowers is an indispensable collection. It offers essential historical background and vivid eyewitness accounts of the independence ballot and the violence that preceded and followed. The contributors display a refreshing combination of fine scholarship and a deep commitment to justice. It should prove a valuable guide to the difficulties that still lay ahead. -- Jose Ramos-Horta, 1996 Nobel Peace Prize Laureate, former President of Timor-Leste In December 1975, Indonesian troops invaded East Timor and set about savagery of untold proportions. Over the course of the next twenty-four years, the people of East Timor endured bloodshed, torture, starvation, disease, epidemics, and the savagery of an occupying army which brought death to 200,000 people. Perhaps one-third of the population perished, while the best in the world stood idly at the sidelines and the rest sent armaments to the occupiers. Still the Timorese never gave up their dream of a future of freedom, democracy, and respect for human rights, a dream which eventually turned the tide of history itself and renewed our faith that good ultimately triumphs over evil. Bitter Flowers is an invaluable resource for the lessons of East Timor, the youngest nation in the third millennium and a source of hope to all who value liberty. -- Kerry Kennedy Cuomo, author of Speak to Power This is an immensely rewarding volume. It includes ground-breaking historical essays, moving narratives from September 1999, and analytical and interpretive pieces which promise to stand the test of time. Imaginatively edited, it also contains East Timorese poems, paintings, photos, and maps.This is engaged scholarship at its clear-headed best-no easy moralism here. -- Herbert Feith, Monash University