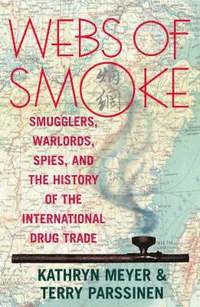 Smugglers, Warlords, Spies, and the History of the International Drug Trade

av Kathryn Meyer, Terry Parssinen
Häftad Engelska, 2002-12-01
369
Köp
Spara som favorit
Finns även som
Visa alla 2 format & utgåvor
This fascinating history of international drug trafficking in the first half of the twentieth century follows the stories of American narcs and gangsters, Japanese spies, Chinese warlords, and soldiers of fortune whose lives revolved around opium. The drug trade centered on China, which was before 1949, the world's largest narcotic market. The authors tell the interlocking stories of the many extraordinary personalities_sinister and otherwise_involved in narcotics trafficking in Asia, Europe, and the United States. Drawing on a rich store of U.S., British, European, Japanese, and Chinese archives, this unique study will be invaluable for all readers interested in the drug trade and contemporary East Asian history.
Visa hela texten

Compact, well-documented. . . . Provide[s] persuasive evidence that the war on drugs has never worked well and that new approaches must be tried. * The Review of Higher Education * An extraordinary history of international narcotics trafficking in the 1900s. * Crime and Justice International * A most original interpretation of international drug trafficking based on extensive research in western and Asian sources. . . . Highly recommended-a bold contribution. -- David Courtwright, University of North Florida Meyer and Parssinen write with exceptional clarity, covering material that has never been adequately addressed. Together, they have written a masterful account of the development of international drug trafficking and this century's long battle with it. -- Alan Block, The Pennsylvania State University This book makes an important contribution to the drug debate by presenting the history of the modern drug trade and the parallel law enforcement efforts in a fully textured and balanced way. It probes motives and examines structures. It follows trafficking organizations from their creation to their demise. -- Jack A. Blum, former special counsel, Senate Foreign Relations Committee Webs of Smoke is a remarkable account of twentieth-century drug trafficking and smuggling. Meyer and Parssinen have found documentation-some only recently declassified-that reveals a fascinating picture of the organization, techniques, and fate of dealers in illicit drugs. -- David Musto, Yale University Meyer and Parssinen have put together an authoritative and well-documented account of the history of world traffic in illicit narcotics in the first half of the twentieth century. * Library Journal * Meyer and Parssinen contribute a great deal to our understanding of the nature of the relationship between drug traffickers and political leaders, which was often ambiguous and more flexible than may be imagined at first glance. . . . This study is not only a major contribution to historical scholarship on international drug traffic; it is also an absorbing story filled with fascinating characters. . . . This is a first-rate study that merits a wide readership. -- John M. Jennings, United States Air Force Academy * American Historical Review * A broad and thought-provoking book. * The Copenhagen Journal Of Asian Studies *