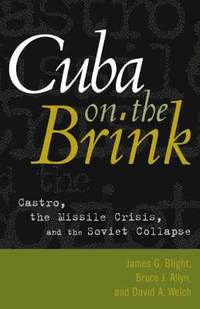 Cuba on the Brink

Castro, the Missile Crisis, and the Soviet Collapse

av James G Blight, Bruce J Allyn, David A Welch
Häftad Engelska, 2002-09-01
389
Köp
Spara som favorit
Specialorder (osäker tillgång). Skickas inom 11-20 vardagar.
Fri frakt inom Sverige för privatpersoner.
With the disintegration of the Soviet Union and international socialism, Cuba now finds itself isolated as the United States continues to press for its economic and political collapse. How Fidel Castro sees Cuba's plight and what he hopes to do about it emerge from this account of a unique conference held in Havana in 1992. The meeting brought together participants in the Cuban missile crisis from the former Soviet Union, Cuba, and the U.S. to discuss its causes and course. This account is now available for the first time in paperback, on the 40th anniversary of the Cuban Missile Crisis. This first meeting between Castro, his ex-Soviet allies, and his American foes produced startling revelations about his dealings with the Soviets, chilling details of the number and kind of Soviet nuclear arms that Cuba possessed in 1962, and an illuminating account of Castro's view of the American threat-then and now. The dramatic exchanges between Castro and such conference participants as Anatoly I. Gribkov, former head of the Warsaw Pact; former U.S. Secretary of Defense Robert McNamara; and Arthur Schlesinger, Jr., Special Assistant to John Kennedy, reveal misperceptions on all sides that led us to the brink of nuclear war. An extraordinary examination of an international crisis, Cuba on the Brink illustrates the ongoing "Cuba problem," and will help guide our actions toward other countries deemed hostile to our national interest.
Visa hela texten

A fresh and powerful contribution to the deeper understanding of the 1962 missile crisis, of Fidel Castro, and of the sustained political hostility between the United States and Fidelista Cuba. No one who cares about even one of these large matters will want to miss this book. -- McGeorge Bundy, special assistant for national security to Presidents Kennedy and Johnson A tour de force. Blight, Welch, and Allyn elicited from Fidel Castro an extraordinarily revealing statement of his thoughts and actions during the Cuban missile crisis. -- Robert A. Pastor, professor and director of the Center for North American Studies, American University So vivid I almost felt as if I were there: in 1992, when Robert McNamara, Fidel Castro, and their colleagues met in Havana to discuss the missile crisis; and in 1962, when they, along with the Soviets, led the world up to, and back from, the brink of nuclear war. Fascinating and chilling-a grim but hopeful reminder for statesmen and citizens alike. -- Lawrence S. Eagleburger, Secretary of State in the George H. W. Bush administration This book shows the human dimension of the Cuban missile crisis as never before, especially in its vivid portrayal of the relationship between Fidel Castro and my father, Nikita Khrushchev. Cuba on the Brink captures the drama and danger of leaders, countries, and ideologies on a collision course with nuclear catastrophe. A marvelous book! -- Sergei N. Khrushchev, Brown University; author of Khrushchev on Khrushchev: An Inside Account of the Man and His Era, by His Son, Sergei Khrushchev A stunning insight into how the world looked from Havana when, for a moment of supreme crisis, Cuba was the hinge of the world. This is history by those who made it. Nothing so authentic on the subject has ever been done before; nothing like it will ever be possible again. -- William D. Rogers, assistant secretary of state for Inter-American Affairs in the Ford administration

Bloggat om Cuba on the Brink

James G. Blight is professor of international relations (research) at the Thomas J. Watson, Jr. Institute for International Studies, Brown University. Bruce J. Allyn is senior analyst and chief of the Moscow Office of Monitor, Inc. David A. Welch is CIGI Chair of Global Security, Balsillie School of International Affairs, and professor of political science at the University of Waterloo.