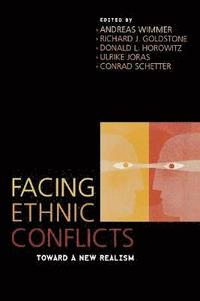 Toward a New Realism

av Andreas Wimmer, Richard J Goldstone, Donald L Horowitz, Ulrike Joras, Conrad Schetter
Häftad Engelska, 2004-10-01
689
Köp
Spara som favorit
Skickas inom 7-10 vardagar.
Gratis frakt inom Sverige över 159 kr för privatpersoner.
Finns även som
Visa alla 1 format & utgåvor
Ethnic conflict is the major form of mass political violence in the world today, and it has been since World War II. Dramatic acts of terrorism and calculated responses to them may distract the attention of policymakers and the public, but ethnic and nationalist conflict continues to pose the greatest challenge to peace and security across the globe. Causes of such conflict and ideas about how to address it are hotly debated in the literature that has emerged over the past fifteen years. This volume offers a unique overview of research and policy approaches to ethnic conflicts. It is the first book to bring together experienced policymakers and key scholars from all disciplines. They debate how to best understand the rise and escalation of ethnic conflict, assess different strategies for peacemaking, mediation, and reconciliation, and evaluate the prospects for conflict management through institutional design. In contrast with a more enthusiastic assessment of the willingness and capacity to successfully intervene in ethnic conflict, this volume documents the new realism that has emerged over the past decade. It recognizes the complex and protracted nature of such conflicts and demands a multifaceted, case-by-case approach sustained by long-term political engagement. Published in co-operation with the Center for Development Research, University of Bonn.
Visa hela texten

...Overall this book manages to systematically summarise the research on ethnic conflicts from different academic and practical political perspectives, while also proposing new ways, or a 'new realism', to understand and help resolving ethnic conflicts. * The Ethnic Conflict Readers Digest * An immensely interesting and valuable volume which should receive much use in upper-level undergraduate and graduate-level courses on ethnic conflict, this edited volume brings together more than a score of contributors to examine the prospects for managing the type of protracted ethnic and national conflicts which have recently proven so destructive to multinational states in the contemporary world, and which have often spilled into the international system. * Peace & Change * An important book. It is very rare to find in a scholarly treatise of this nature a wide representation of different voices arguing a range of analytical standpoints as well as reporting empirical data about root causes, dynamics of intensification, and methods of management and resolution of ethnic conflicts. * H-Genocide * This volume is a needed addition to the diverse but often incoherent ethnic conflict literature. An impressive list of contributors, for the first time combining accomplished scholars with the expertise of diplomats, NGO officers, and government advisors, shows the entire spectrum of methods, approaches, and worldviews of the various actors concerned about understanding and ultimately preventing ethnic violence. Highly recommended. * CHOICE *