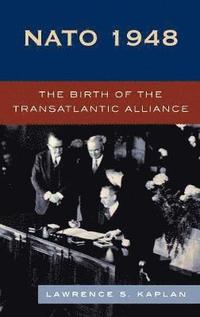 The Birth of the Transatlantic Alliance

av Lawrence S Kaplan
Inbunden Engelska, 2007-06-01
1219
Köp
Spara som favorit
Skickas inom 10-15 vardagar.
Fri frakt inom Sverige för privatpersoner.
Finns även som
Visa alla 2 format & utgåvor
This compelling history brings to life the watershed year of 1948, when the United States reversed its long-standing position of political and military isolation from Europe and agreed to an "entangling alliance" with ten European nations. Not since 1800, when the United States ended its alliance with France, had the nation made such a commitment. The historic North Atlantic Treaty was signed on April 4, 1949, but the often-contentious negotiations stretched throughout the preceding year. Lawrence S. Kaplan, the leading historian of NATO, traces the tortuous and dramatic process, which struggled to reconcile the conflicting concerns on the part of the future partners. Although the allies could agree on the need to cope with the threat of Soviet-led Communism and on the vital importance of an American association with a unified Europe, they differed over the means of achieving these ends. The United States had to contend with domestic isolationist suspicions of Old World intentions, the military's worries about over extension of the nation's resources, and the apparent incompatibility of the projected treaty with the UN charter. For their part, Europeans had to be convinced that American demands to abandon their traditions would provide the sense of security that economic and political recovery from World War II required. Kaplan brings to life the colorful diplomats and politicians arrayed on both sides of the debate. The end result was a remarkably durable treaty and alliance that has linked the fortunes of America and Europe for over fifty years. Despite differences that have persisted and occasionally flared over the past fifty years, NATO continues to bind America and Europe in the twenty-first century. Kaplan's detailed and lively account draws on a wealth of primary sources-newspapers, memoirs, and diplomatic documents-to illuminate how the United States came to assume international obligations it had scrupulously avoided for the previous 150 years.
Visa hela texten

Kaplan starts with the worsening of relations between the Soviet Union and the Western nations, and follows the twists and turns in the difficult negotiations that led to a treaty marking a radical change in US foreign policy. . . . Highly recommended. * CHOICE * This meticulously researched and well-written analysis builds on Kaplan's extensive earlier research on NATO's importance in the Cold War. . . . Its richly detailed analysis makes a significant contribution to the historical record. This judicious appraisal will be of interest to students of diplomatic history and international relations alike. -- Meena Bose, Hofstra University * Journal of American History * Larry Kaplan's book brings back to life the unique period in 1948-1949 that witnessed the birth of America's first 'entangling alliance.' His is an exceptionally lively, richly documented, and always enthralling study of the events that led to the greatest transformation of American diplomacy, of the men who made it happen, and of the challenges they had to overcome. -- Pierre Melandri, Sciences Po Lawrence Kaplan, a foremost specialist in the history of NATO, has written an insightful account of its birth. The relationship between the United States and Europe has suffered in recent years, making this book an especially timely reminder to a wider readership of just how much effort the past generation put into making the North Atlantic Alliance a reality in the aftermath of the Second World War. Elegantly written and cogent, the book should be read by all students of NATO, European affairs, and U.S. foreign policy on both sides of the Atlantic. -- Saki R. Dockrill, King's College London There is no better team than Lawrence Kaplan together with Morris Honick to recall the events that led to the creation of the West's chief Cold War instrument in opposing the Soviet Union. It is easy, in these post-Cold War days, not to acknowledge the difficulties that surrounded the creation of the international political-military institutions that are still in use today. Although constantly adapting to a changing international political environment, their basic functions of reinforcing common interests and denying 'divide and conquer' opportunities to actual or potential enemies, are still with us. It is also easy to forget the extreme reluctance on the American side to become 'entangled' in matters of European defense. For these reasons the detailed exposition of the debates and related considerations that underlay the formation of an anti-Soviet 'West' is a welcome addition to the extensive literature, most of it out of necessity based on secondary sources, that chronicles this vital period of our history. -- Robert S. Jordan, University of New Orleans

Lawrence S. Kaplan is University Professor Emeritus at Kent State University, where he was director of the Lemnitzer Center for NATO Studies for many years, and adjunct professor of history at Georgetown University.